This traditional thermostatic mixer shower system is a great way to add a luxurious and timeless style to your new shower enclosure or shower bath.

This shower system comes complete with a feature chrome rail and traditional shower mixer valve, with ceramic handle detailing. The valve works wonderfully with the classic rain can shower head and the added feature of a traditional handset completes the look to perfection.

An easy to use diverter allows you to switch between the overhead shower, whilst an anti-scald cut off device helps to keep the whole family safe and secure when showering.

Complete with an elegant curved wall arm, the shower head also contains rubber inserts which help to reduce the build-up of limescale. This traditional shower requires a minimum water pressure of 0.5 bar.

How can we improve our product information?

Let us know. Your feedback is greatly appreciated.

Does the shower work from a combi boiler?

Hi Roger, yes a combi boiler will be great. You just need to check your water pressure reaches the minimum of 0.5 Bar.

Do the water pipes have to come from inside the wall for this or can they be exposed chrome pipes?

The elbows will turn Sarah, so the pipework could be exposed.

Will the shower head and the hand-held unit operate both independently and both together?

David, yes it can, this product has a diverter meaning it can run either the shower head or the handset at any one time.

Can you change the angle of the main shower head or is it fixed?

This is on a ball joint Caroline so it can be angled slightly.

Can the extension distance of the rain shower head be modified / shortened from the 660 length?

Hi Adam. Due to the design of this item, you would only be able to alter the height of this item and not the length.

How powerful is the second shower? Does it work just as well when you use it instead of the rain shower? Or is it more of a secondary shower? Trying to find a model where both are just as good as each other... Thanks!

Handheld shower heads do tend to offer a higher pressure to that of an over head shower Katie, this is due to the smaller size making the flow more concentrated.

Is the smaller shower head adjustable in height?

The smaller shower head is on an adjustable bracket for sliding up and down the rail Lisa.

Is the projection to the centre of the shower head, or is it from the wall to the furthest point?

The projection of 660mm is from the wall to the furthest away part of the shower head Sam.

I have a standard boiler system with a hot water tank in the airing cupboard. In order to get a good shower pressure can I use a 1.5 Bar pump with the rain head shower system?

Thanks for contacting us about this product Chris. You need to make sure there's equal pressure from both the hot and cold water feeds then using a pump would be fine. You're local plumber will know how to connect it right.

What position does the handle on the diverter need to be in to operate the hand shower?

The lever on the diverter needs to be on the right hand side of the rail to allow water to divert between the two heads and it’ll need to be in the up position to allow the hand spray to work, Emma.

Your essential add on items are loading, this shouldn't take long.

More about our delivery service

Delivery cost and service may vary depending on other items in your basket and delivery post code.

Whilst all our products pass strict quality standards, on very rare occasions you may find an item arrives damaged.

Please make sure you inspect your goods as soon as you receive them and let us know within 14 days of receipt if an item is damaged, by calling us on 0344 804 48 48.

Once the damage has been confirmed, we'll ensure it's replaced free of charge, and with the minimum of fuss.

Collection and redelivery fees may apply

As well as offering unbeatable prices, we're delighted to offer you an affordable and flexible way to finance your new bathroom.

More from this collection 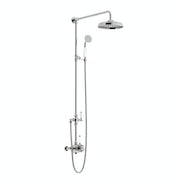 You can access your favourites via the heart next to the search box or the side menu if browsing on mobile.