Up to 60% off December Sale + offers of the week

Waiting for the kettle to boil is now a thing of the past, thanks to our range of instant boiling water taps. If you’re considering buying one for your kitchen, check out this expert guide first.

A convenient option for modern kitchens, instant boiling water kitchen taps come in a variety of designs to suit a range of needs.

With this instant hot water tap guide, you can easily jump to the most relevant section by clicking on any of the links below:

What is an instant boiling water tap?

There really is no mystery, as this product does exactly what it says on the tin, delivering instant boiling water whenever you need it—perfect for hot beverages like tea and coffee, cooking and rinsing. Designed to fit seamlessly with your kitchen décor, they come in a range of shapes and sizes but, generally, look very similar to a regular kitchen tap, complete with chrome finish. 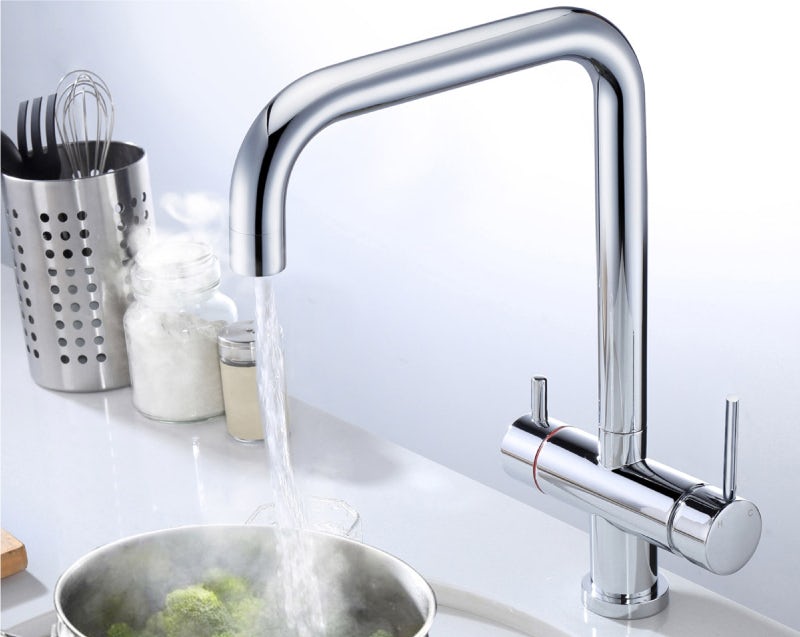 Great for rinsing veg and many other functions, the Schön Hilbre 3-in-1 boiling water tap will make a great addition to your kitchen

How does an instant boiling water tap work?

Unlike a conventional tap, a boiling water tap is connected to a boiler tank, which is usually housed directly beneath the tap, within your kitchen sink unit. The boiler tank will need to be plumbed into the water supply and plugged into an electrical socket.

There are several different designs, which we touch upon later in this instant hot water tap guide. However, in all cases, when the instant boiling water option is selected, the water, which is maintained at a near-boiling temperature, flows out. Cold water is then fed into the tank to replace the used water and the whole process begins again. 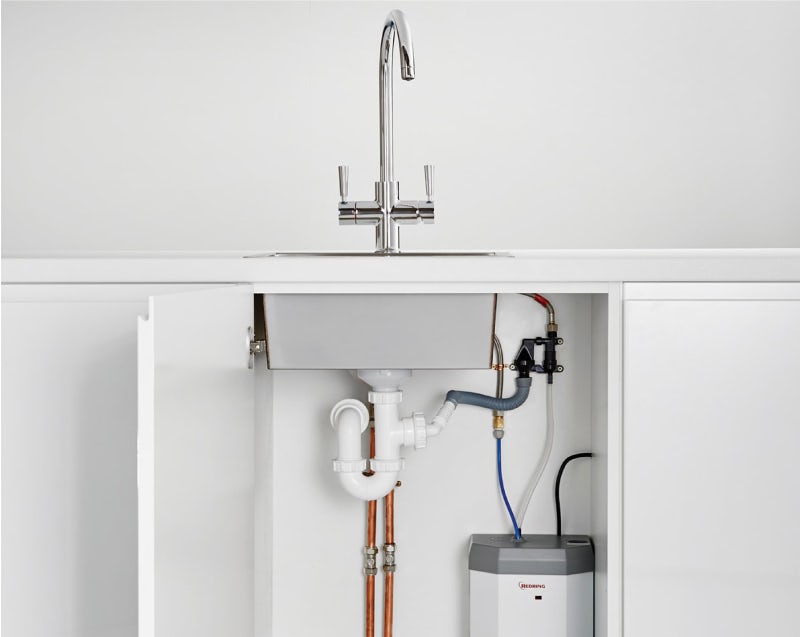 Instead of waiting for your kettle to boil, which can take around 4 minutes, boiling water is delivered instantly, so you can get on with more important things.

On average a kettle costs 2.5p every time you boil it and, in most cases, you overfill to ensure you have enough water for your needs. With an instant boiling water tap, you only use what you need, meaning improved energy efficiency.

All the instant boiling water taps we sell come with a safety feature, which means you can’t simply turn on the flow as you would with a conventional tap, which is vital if you have younger children. Most come with an insulated spout, to help prevent accidental scalding. The boiling water also comes out at a lower pressure to prevent splashes. All-in-all, this makes it safer to use than a kettle.

Most boiling water taps also come with a filter that removes impurities from your water, helping to improve the taste. This is ideal for those who are looking to reduce plastic wastage by not purchasing mineral water (see below).

As you only use precisely what you need, there is very little, if any, water-wastage. This means your instant boiling water tap goes some way to achieving a greener, more environmentally-friendly household.

Kettles and their electrical leads can take up precious worktop space in your kitchen. An instant boiling water tap is built into your overall design, meaning less clutter.

Of course, the main function of an instant boiling water tap is to make cups of tea or coffee, however, there are multiple other uses including cooking rice or pasta, thawing food or filling a hot water bottle when you’re feeling a bit under the weather. 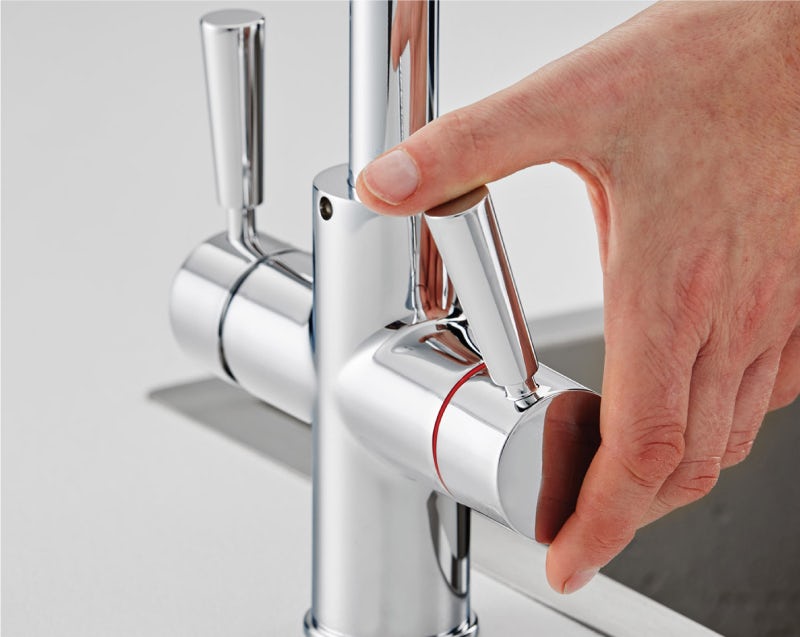 How easy is it to fit an instant boiling water tap?

Your instant boiling water tap will need to be plumbed into your water supply, as well as being plugged into an electrical socket. Therefore, we would highly recommend hiring a qualified trade professional to do this for you, rather than attempting it yourself.

Most boiling water taps can fit an existing sink tap hole and the tank is quite compact, so it will fit neatly within an undersink unit.

It should be a straightforward and relatively inexpensive job, especially for a tradesperson who has experience with kitchen projects.

This video shows how a Bristan Gallery Rapid 4 in 1 boiling water tap is fitted.

What types of instant boiling water taps are available?

As the name might suggest, this type of boiling water tap is used purely to deliver instant boiling water whenever you need it. This is a good choice when you simply want to add a boiling water option to an existing set up, without also removing your current kitchen sink mixer tap. 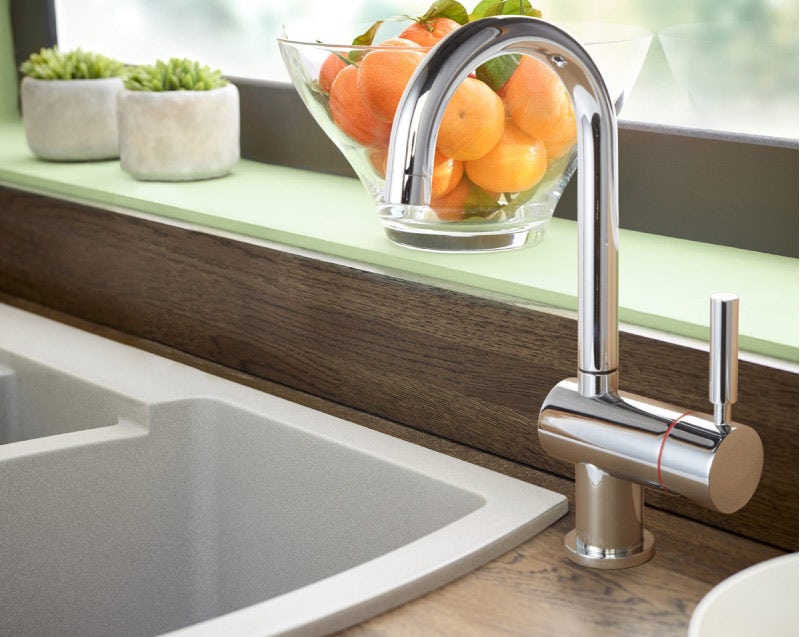 A very popular choice, this type of tap offers the usual hot and cold flows, as well as instant boiling water. It can be used like a conventional mixer tap and, when the safety handle is turned, boiling water is delivered. This is a good option when replacing a mixer tap or for a new kitchen sink installation. 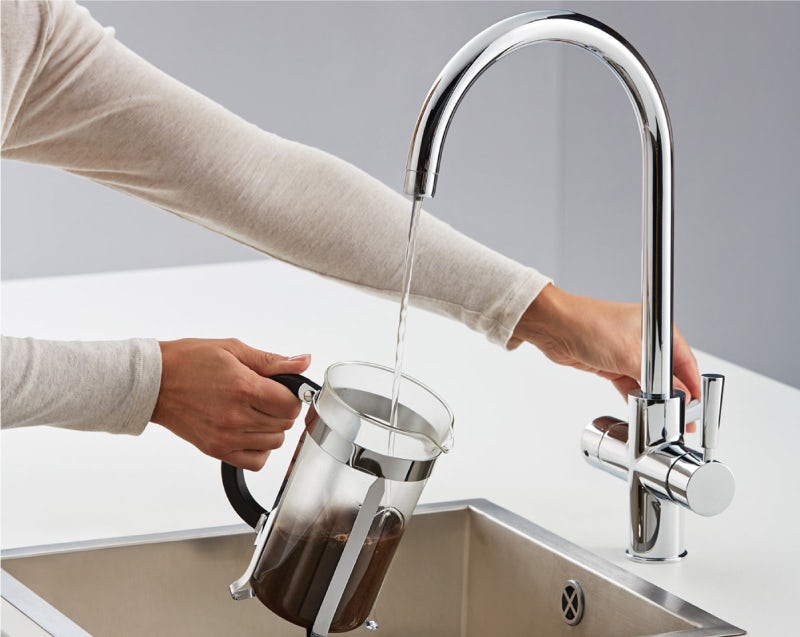 Taking the combined set up a step further, a 4 in 1 boiling water tap also offers chilled, filtered water as well as the other 3 options mentioned in the previous paragraph. This is ideal for those who prefer their water nice and cold and is especially welcome on a hot summers day.

We supply taps from the following brands:

As well as selecting either a C or U shaped spout, you can even choose from a range of different finishes, including brushed nickel, brushed gold, graphite and rose gold, to complement your décor.

Things to consider before you buy

How much will you use it?

If the answer to this is “never”, then a boiling water tap probably isn’t the right choice for you. However, if you do like a hot beverage or two as part of your daily routine, it is incredibly convenient.

Most instant boiling water taps come with filter which will need to be replaced at regular intervals (every 6 months is recommended). You will need to factor this into your ongoing costs.

You can choose to use your boiling water tap without a filter but this is not recommended as limescale will build up over time, affecting performance and, at worst, causing your tap to stop working.

If you live in a hard water area, limescale can build up on the spout over time. To remove, uninstall the tap and soak in white vinegar for 30 minutes, before scrubbing off.

If, for whatever reason, you don’t use your boiling water tap for an extended period of time, you will need to unplug it and drain the tank.

Unless you’re preparing cuppas for a small army, most of the tank sizes (just over 2 litres) will be more than sufficient for your needs. Make sure you have enough space to house this beneath your sink before purchasing.

Water delivered from instant boiling water taps are usually around 96°C, although, in most cases, you should be able to set this lower if you desire.

All the instant hot water taps we sell come with extended guarantees. Some are dependent on the filter being changed every 6 months, so do check before you buy.

Posted by Adam Chard in Kitchen advice | 3 years ago