Art deco is glamorous, luxurious and as on-trend as ever thanks to the release of Baz Luhrmann’s film, The Great Gatsby. Yet again, the world is in a spin for all things 1920s.

Our interior design team have produced a handy mood board to help you create your own art deco inspired bathroom. You can also check out our infographic that charts a potted history of art deco style. However, you can get art deco inspiration in all manner of places.

Be inspired: Get a little taste of the luxe life here in the UK

The art deco period spanned from the boom of the roaring 1920s to the bust of the depression-ridden 1930s. Art deco style is glamorous, luxurious and takes its influence from the ancient worlds, notably Egyptian and Aztec architecture.

It permeated British culture from fashion, decorative arts, and architecture through to music and literature and left a lasting legacy that we continue to be inspired by.

We’ve selected some art deco highlights from around Britain for you to visit – rest assured you don’t have to go far to gain some inspiration from this decadent period. Heading to our capital city, you’ll be able to feast your eyes on the instantly recognisable geometric patterns or head further afield to spot some hidden but preserved gems from around the country.

Here we give you the pick of the best:

Place for a cocktail: The Savoy Hotel, London:

This luxury hotel, situated on the banks of the River Thames in London, is famed for its art deco Beaufort Bar with interiors of jet-black and burnished gold. As you sip your champagne cocktails whilst being entertained by burlesque dancing and cabaret you’ll be transported back in time to the 1920s.

Claridge’s is London’s art deco jewel. This luxury hotel is one of the finest examples of the art deco style in the country. Designed to perfection in the 1920s, many of its original features remain impeccably in place including work by Basil Lonides and a beautiful Lalique door panel. Take an afternoon tea, served in art deco crockery, in any of the beautifully styled lounges to have a glimpse of its illustrious past.

3 places to admire for free in London: 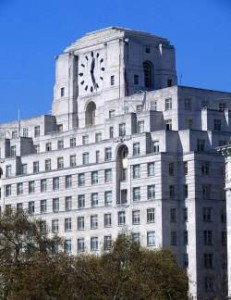 Situated on London’s Embankment, the Shell Mex Building is a stunning remnant of the 1930s. Its prominent clock face that can be admired from the Southbank or on the Strand is London’s largest. You can take a peek inside this building’s grand interior during Open House weekend in September. 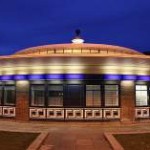 An example of funky, but functioning art deco architecture is Southgate Tube Station. This is well worth a visit. Described by some as an art deco flying saucer, its escalators are one of the most attractive features on the tube network. The preserved condition of the station's original features, particularly the escalators, makes Southgate popular for filming scenes for period dramas.

“Five miles out of London on the Western Avenue, Must have been a wonder when it was brand new. Talkin' 'bout the splendour of the Hoover factory, I know that you'd agree if you had seen it too.” goes the Elvis Costello song.

The Hoover building originally made essential components for tanks and aircraft during the Second World War, before churning out millions of vacuum cleaners to keep the nation's homes clean. It’s now a Tesco supermarket.

Art deco events: in London and beyond:

Check in with the London Art Deco Society to find an array of events, exhibitions from around the city to a little further afield. Take a trip on the Orient Express or head to Quaglinos for the famous meet up of the Hutch Club for what’s billed as cocktails, music and glamour.

Where to buy art deco furniture:

If you fancy adding a touch of art deco into your home the Old Cinema in Chiswick is the place to find a rare bargain. Shop in person or online for mahogany walnut dressers, Bakelite chrome tables, black lacquered chevil mirrors or cut glass decanters. They have a fantastic selection of rare pieces from this period. 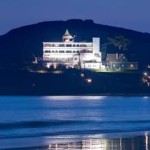 Burgh Island Hotel is the epitome of art deco style and glamour both inside and out. It’s a classic example of a preserved, iconic art deco building and was the inspiration for two of Agatha Christie’s murder mystery novels and played host to famous playwright Noel Coward. Check in and immerse yourself into this period as you sip a classic cocktail in its famous Peacock Bar with its domed art deco glass roof.

A place to listen: The Stockport Plaza, Greater Manchester:

The Stockport Plaza, a popular cinema in its 1930s heyday, is home to one of Britain’s finest examples of art deco functioning design. The Plaza’s organ was built by John Compton Organ Co and was unique with sunburst decorative glass panels, illuminated in various colours. This instrument still evokes the spirit and atmosphere of the 1930s super cinema era.

A place to watch: The Rex Cinema, Berkhamsted, Hertfordshire 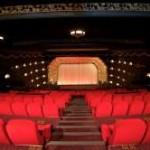 First opened in 1938 and restored and reopened in 2004, the Rex Cinema in Berkhamsted is the finest examples of what the BBC described as 'possibly Britain's most beautiful cinema in the UK.' Book in advance and reserve your table to watch one of the latest films. In true 1930s style the flamboyant owner makes a brief cameo on stage before each film showing to provide a preview of upcoming films.

Have you discovered any hidden art deco gems in your area or have any favourites we’ve not mentioned here? We’d love to hear from you. Comment below or tweet us at @VictoriaplumUK

Posted by Adam Chard in Inspiration | 5 years ago