As featured on Escape to the Chateau DIY

If you’ve been watching the fascinating Channel 4 documentary Escape to the Chateau DIY, you may have noticed some of our products…

Ever wondered what it would be like to live in your very own castle? Well, the Strawbridge family have done just that, and the Channel 4 cameras have been with them every step of the way, documenting their experiences in the TV series Escape to the Chateau. This popular series, which has been running since 2016, has even spawned a spin-off called Escape to the Chateau DIY, featuring families who are also renovating their own chateaux.

Now in its fourth series, Escape to the Chateau DIY was recently broadcast on Channel 4. In the first 5 episodes, we followed the story of Fiona Jones, who had purchased the fabulous Château du Masgelier in the Limousin region of South Western France. Fiona was looking for something extra-special for a unique bathroom space and contacted me for help. Of course, I was more than happy to oblige!

I was involved in the project from an early stage and I chatted with Fiona about her exact needs and desires for this unique bathroom space. Situated in the circular King’s Tower, it would function as an ensuite bathroom for an opulent guest bedroom. As it would be enjoyed by paying customers, the bathroom simply had to look the part. This, however, presented a real design dilemma—circular-shaped bathrooms certainly aren’t too common!

As you can imagine, for such a stunning setting, Fiona wanted an equally impressive and luxurious bathroom. But, with so many other jobs required around the Chateau, she couldn’t afford to splash out with a wildly exuberant budget, nor could she spend a vast amount of time on what was just one of numerous projects. As Fiona states in the series herself “Time is money!”.

Thankfully, creating beautiful bathrooms on a budget is our speciality here at Victoria Plum, so I was able to present a range of options which looked incredible but didn’t cost the earth.

Fiona already had a good idea about the look and feel of both the bedroom and the ensuite, which would feature a typically French monochrome Toile de Jouy theme (a repeated pattern around the walls on a white background).

With the products, we took stylistic direction from the age and design of the Chateau itself. As a 12th century building which, at one time, belonged to King Louis XIV, one thing we could instantly decide upon was that the items we chose would be traditional and luxurious in style.

The centrepiece of such a palatial retreat simply had to be a traditional roll top bath, the ideal place for a guest to relax at the end of the day. So, after plenty of thought, I now had the perfect products and layout in mind. 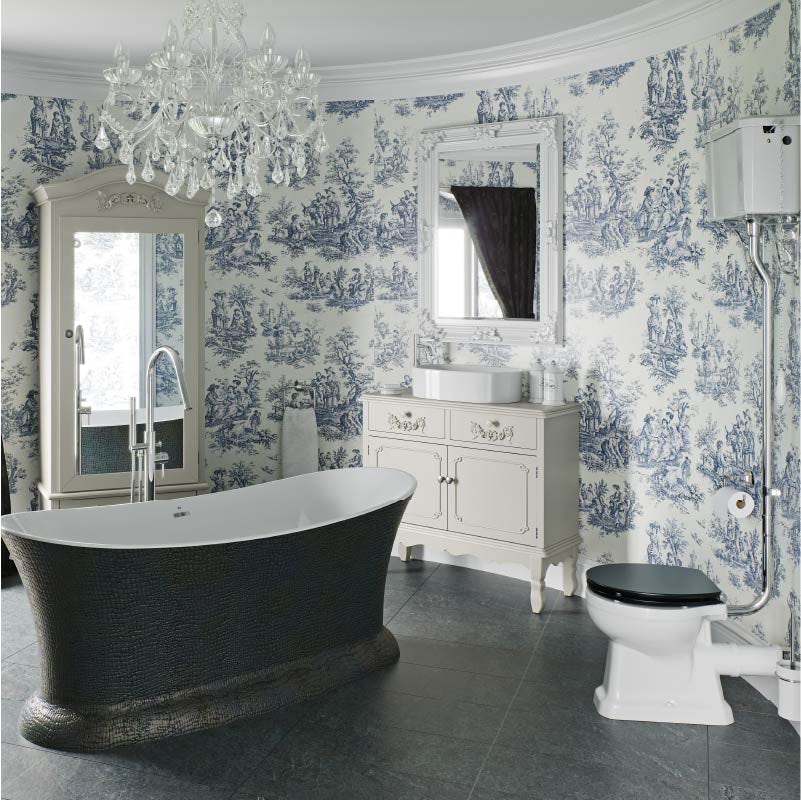 Get the Look yourself

Of course, while not many of us get to own a genuine chateau, as the old saying goes “an Englishman’s home is his castle” (although, perhaps that should be updated to “a British person’s home is his or her castle”), so why not recreate your very own chateau bathroom in your own domain?

Here are the products we used… 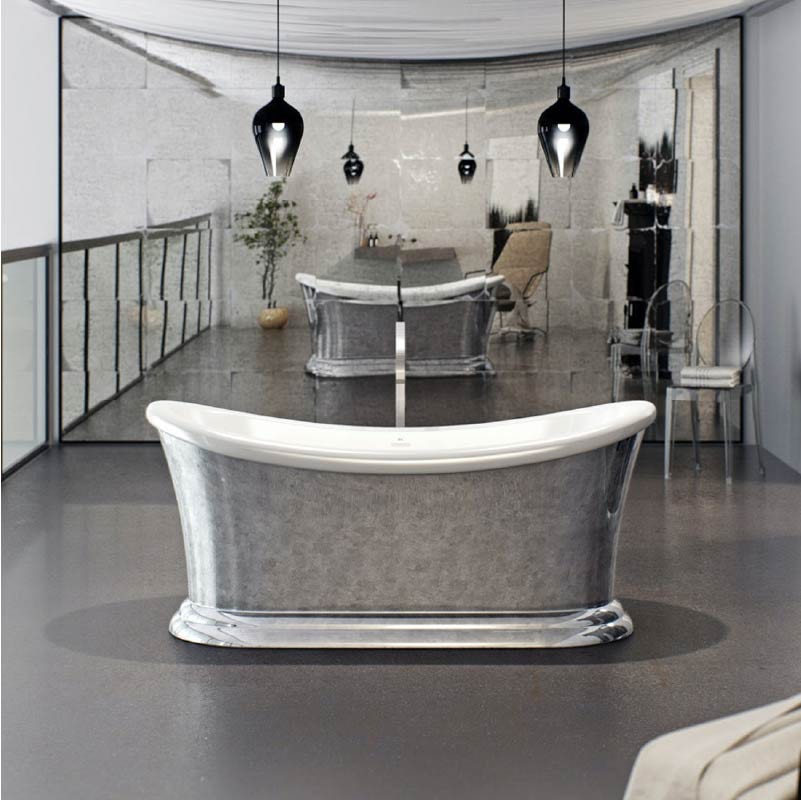 Despite the bath being traditional in its design, we opted for a more modern style of tap. The freestanding bath shower mixer tap and high rise basin mixer tap from the Spencer range are both simple yet sophisticated with elegantly curved spouts. Easy operation and control is also a key function.

For that authentic traditional look, you simply can’t beat a high level cistern toilet like this one from The Bath Co. Camberley collection. Adding to the monochrome theme, we settled on a black seat. 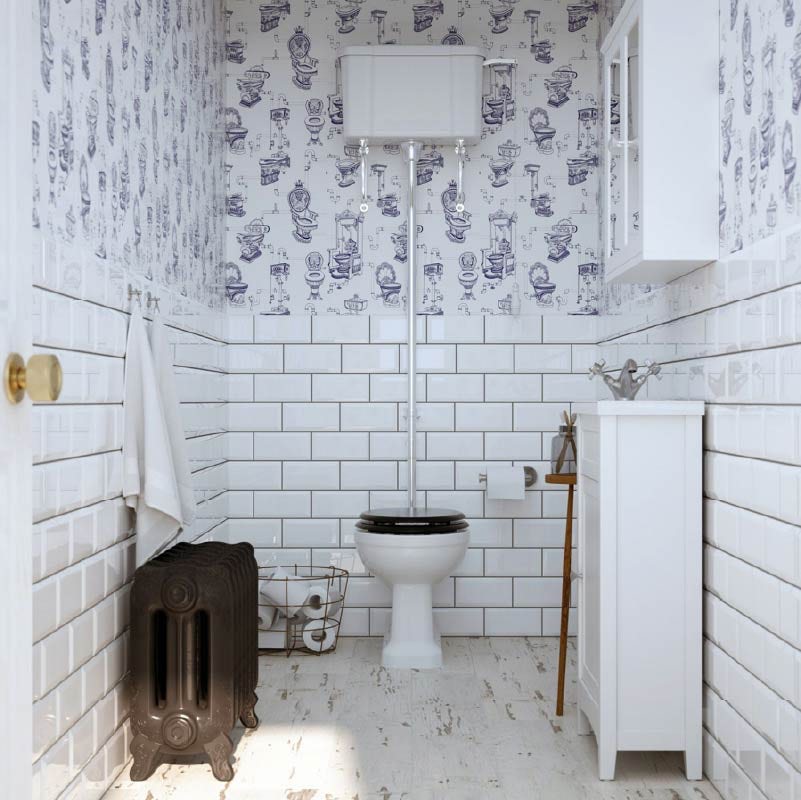 With its simple curved shape, the Tate countertop basin was the perfect choice for this bathroom, despite being a more contemporary design. Adding a genuine boutique feel to the bathroom, it was combined with a period style cabinet for a more traditional appearance.

Due to all the issues Fiona had with ripping up old carpet, we chose Krono xonic Wild Thing waterproof vinyl flooring for the bathroom. In the series, Fiona notes just how easy the flooring is to fit, as it simply clips together leaving a hardwearing yet stylish surface that’s easy to clean. 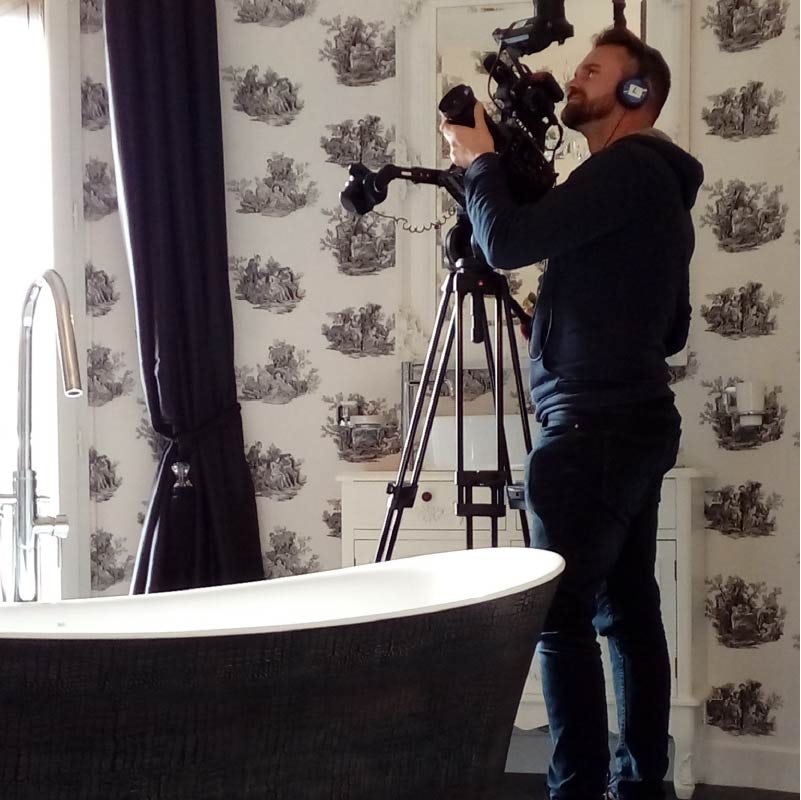 Looking for help planning and designing your bathroom? With Victoria Plum Design and Installation, we’ll do all the hard work for you, producing a free, no-obligation design that matches your needs. Plus, with fully accredited installation, you’re in good hands.

Since the summer of 2016, the channel 4 series Escape to the Chateau has been following Dick Strawbridge, ex-army officer and now TV personality, his wife Angel and their 2 children, as they move into and renovate a stunning yet abandoned 19th century chateau in Mayenne, North Western France.

As a long-term project and real labour of love, the Strawbridge family are now into their fifth year at the Chateau, as the cameras follow their new life in these truly unique surroundings. This series has proved so popular, a spin off series was launched in 2018, called Escape to the Chateau DIY. However, the focus shifts to other families who have undertaken their own chateau renovations, with Dick and Angel offering tips and advice.

In series 4, we meet Fiona Jones, who had purchased the 800 year old Château du Masgelier, originally built by the Knight’s Templar. Why not find out more about Fiona’s restoration project by following her on Facebook? 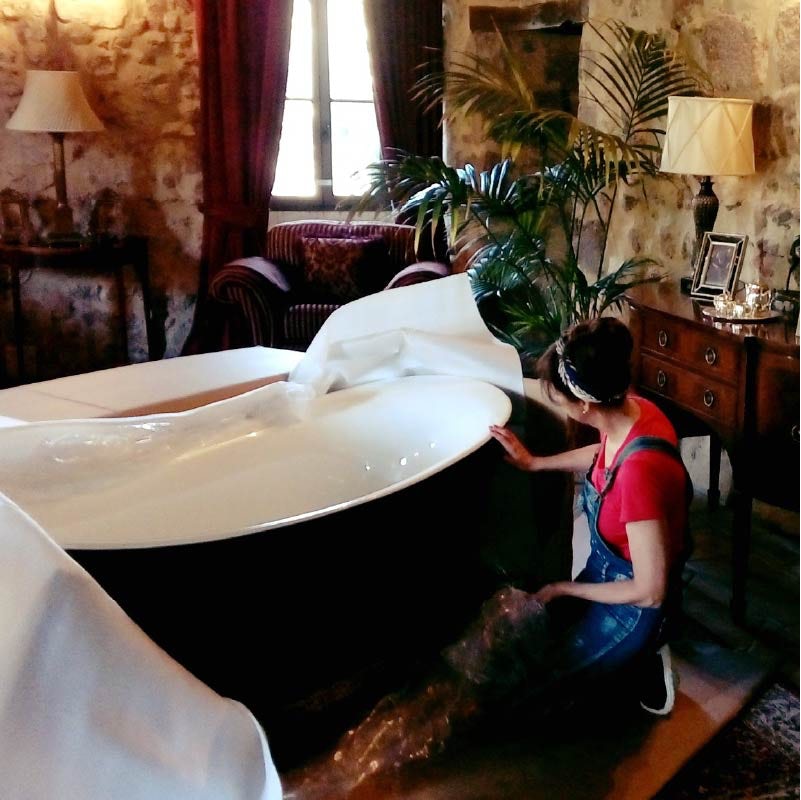 Watch Escape to the Chateau DIY

Whether you’ve been following the series or not, you’ll find every episode on Channel4.com. There are an incredible 85 to date and they’ve been great to binge-watch whilst in lockdown—I’m sure you’ll love them as much as I do! The rest of the series is due to air on Channel 4 later in the year.

From the grandest chateau to the smallest of spaces, at Victoria Plum you’ll discover the very best ideas for bathrooms. Looking to do it yourself? Discover practical advice for bathrooms, including installation guides complete with instructional videos.

Posted by Nicky Kingston in Inspiration | 2 years ago

Nicky is our resident Stylist and loves bringing new and exciting bathroom trends to life. Nicky’s passion for design led to a 1st class degree in Surface Design & Textiles, before earning a reputation as a home stylist in London.