Bathroom ideas Inspiration His and Hers: Design tips for shared bathrooms

His and Hers: Design tips for shared bathrooms

If there’s something we Brits love, it’s a good royal wedding. From the choice of dress to the star-studded guest list, everything becomes a talking point, plus, it’s a great excuse for a party.

However, as we have seen, the course of royal romance doesn’t always run smooth. Many young couples who move into together often experience friction, especially when they’ve been used to their own space for a long time. This can be especially true when sharing a bathroom. So what advice would we give Harry and Meghan on their big day?

Many celebrities, including Joan Collins, Michael Caine and even American First Lady Melania Trump, have publicly stated that separate bathrooms are vital to maintaining a happy marriage.

This may be all well and good for wealthy actors, socialites and even royalty, but what if the new royal couple want to share absolutely everything, including their bathroom?

How do you transform a great British bachelor pad like this into a shared space, without paying a princely sum?

When you move in with a loved one, it’s only natural for you to want to put your own stamp on a place, but also consider the other person’s tastes too. You may have managed to achieve this in the living room and bedroom, but the bathroom is a different case entirely.

This is a space that families usually have to share. Remember the arguments between siblings over the amount of time taken in the bathroom before school? It’s often a different story for couples without any children. After all, it’s just the two of you, so instead the bathroom becomes a place to relax - a retreat away from the stress of daily life. However, it does also have to be practical for the morning routine.

If one partner is messy, leaving toiletries, hair products and (God-forbid!) hair all over the place, it can cause real friction. So if you don’t want the bathroom to mark the end of a happy relationship, here are some design tips to help create a space that matches your lifestyle together.

If the two of you find yourselves tripping over each other in the morning as one’s shaving while the other tries to brush their teeth, adding a second basin is a real possibility. This isn’t as uncommon as you might think and it does solve a lot of problems. Rather than large overbearing sinks, opt for something a little sleeker, like a counter top basin, so they don’t take up as much space. Add 2 small bathroom cabinets - that way, you can never accuse each other of using the wrong razor!

Bridging the Atlantic. What do you think of this right royal bathroom? Fit for a prince and princess?

Split it down the middle

Men often complain that women take up too much room in the bathroom, and it can often be a source of friction. To avoid any arguments over the amount of space available, why not just split the room in two? One half for her and one half for him. It might seem a little juvenile, but it’s often the most sensible approach.

While you might have always dreamed of a bright pink bathroom, decorated with lots of frilly accents, he might not be so keen. The same goes for the men, the industrial style grey colour just isn’t feminine enough.

Rule out any colours that the other doesn’t like and opt for something you both like, perhaps a blend of neutrals. You can always add a touch of individuality with colourful towels and bathroom accessories. Or even add some colours that mean something to the both of you (see our red, white and blue bathroom above!).

Separate the bath and shower

Many people have a shower head installed over the tub, but if you’re sharing a bathroom this limits the room to being suitable for just one person. If space allows, try to separate the bath and shower as this means both of you can get ready at the same time. Alternatively, if you're feeling sociable, you could fit a larger bath for sharing!

If that’s not an option, consider a double shower head instead. Remember, living together does take a lot of compromise. So, instead of pushing your design ideas onto the other person, consider styles that will suit your lifestyle together.

Check out our bathroom ideas, for more great inspiration. 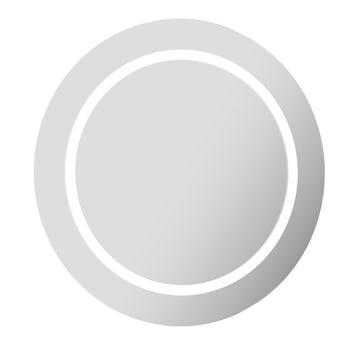 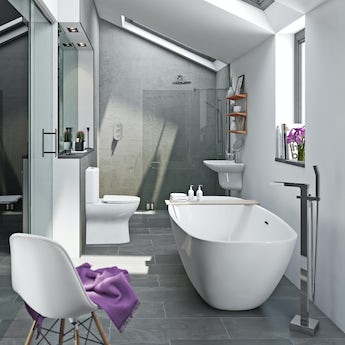 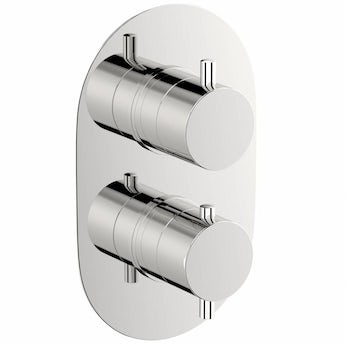 How to create a family friendly bathroom space

Do you dream of a relaxing, spa-like experience every time you step into your bathroom but have to cater to the rest of your family? Well, we think we can help. We've come up with some great styles that can help make the perfect family-friendly bathroom.

Reclaiming your bathroom after a break up: 5 top tips

Wash that man (or lady) right outta your hair and reclaim your bathroom after a break up, with these 6 top tips.

With the average Brit spending between £24 - £86 on Valentine's Day gifts, we've come up with 4 low cost, bathroom-based romantic gestures that will get you into your partner's good books.