In from the cold: the rise of indoor toilets

It’s hard to imagine that this time last century most people in the UK lived in houses that only had an outside toilet. Today it would be unthinkable but it’s really only the relatively recent developments in plumbing systems that have allowed us to get used to the way things are now.

It’s easy to take the mechanisms of flushing toilets for granted, but before they became widely used the most common domestic solution was a small external outhouse with an accompanying cess pit.

Nowadays the only place we find set-ups like this might be at a music festival, and often this can be one of the most off-putting aspects of the whole experience!

The late Victorian period saw the widespread introduction of dedicated indoor rooms for a toilet for more wealthy people and in London in the 1890s there were even separate building regulations that applied to working class housing construction which meant an indoor toilet did not have to be included.

Of course, there was no dedicated "bathroom" either and most working class people used an old "tin tub" that was filled with water by hand. Many people in older properties had this kind of lifestyle continue right through to the mid-1960s!

After the First World War ended (and from 1919 onwards) all new housing developments in the suburbs of London had to include an inside toilet. This generally began the practice of combining a toilet and bath in one room to save on construction costs.

From this point onwards, the distinction between working class housing and more expensive properties became based around having more than one indoor toilet, meaning there would be one upstairs, sometimes included in the bathroom, and another one downstairs. This was usually smaller and known as a ‘closet toilet’ or ‘cloakroom bathroom’. 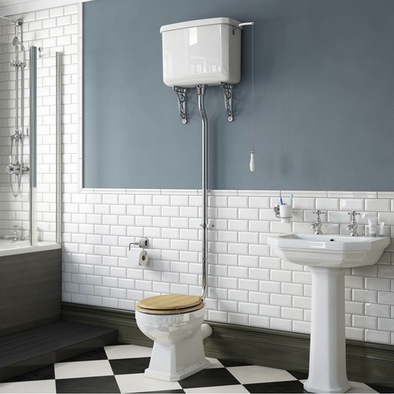 In the early part of the 20th century, high level toilets like this were prevalent.

In the UK there was a long period after the end of the Second World War where investment in infrastructure was low and many people, especially in the major cities, lived in conditions that would be thought of as unacceptable today.

By the mid-60s, a programme of construction had begun that saw slum clearance, demolition and major home building schemes. Although many long standing communities were uprooted and in some cases broken up by these measures, the impact of having access to modern plumbing comforts proved to be a great influence in encouraging many people to accept the moves involved.

The impact of improvements in sanitation for the vast majority of people in the UK over the past hundred years or so has had major positive effects on health and living standards.

Together with increased nutrition and vastly improved healthcare facilities, a relatively small thing such as the development of the modern toilet in a domestic setting has helped us all live long and healthier lives.

From the high-tech Japanese versions that do everything from take your blood pressure to pre-warm the toilet seats, right through to spa-like design styles to create a particular mood, the toilets in our homes are far more than functional spaces today ... and we’re thankful for it!