Why do toilets have toilet seats?

A question that may never have even crossed your mind before is “Why is there a seat on the toilet?”. We lift the lid on toilet seats and how they became a permanent fixture in our bathrooms.

Toilets seats are a fact of life we never even think to question but they do serve a specific purpose. It’s a basic part of the bathroom and lavatory that we always expect to be there and below we explain the importance of toilet seats.

A brief history of the toilet

Before we explain the reason why toilets have seats, we thought we’d give a quick overview of the history of the toilet (for more in-depth information, see our history of the toilet). Who and when the first toilet was invented is still debated by historians, with some saying the honour either goes to the Scots (which could be as far back as 3,000 BC) or the Greeks (1,700 BC).

Given the well-known drainage innovation skills of the Romans, it comes as no surprise to learn that public toilets were available around 315 AD in Rome. “Potties” were a thing in Medieval Britain, with residents simply throwing the contents of their bowels out the window or door once finished. It probably explains why the streets during this time were sanitary nightmares and stank to high heaven.

Sir John Harrington is credited with inventing the first flush toilet system in the late 16th century, although it took almost 200 years for him to gain recognition. Sanitation in the UK wasn’t much better during Victorian times until the 1848 Public Health Act in England decreed that every home should have a water closet (WC), and when a sewage system was finally built in London by 1865, the threat of dying from diseases like cholera and typhoid were reduced dramatically.

Toilet rolls started to become widely available at the start of the 20th century, and as bathroom technology became more advanced water tanks also included as a standard feature. The evolution of the toilet continues today, with digital toilets in Japan warming seats and washing and drying you before you get up! 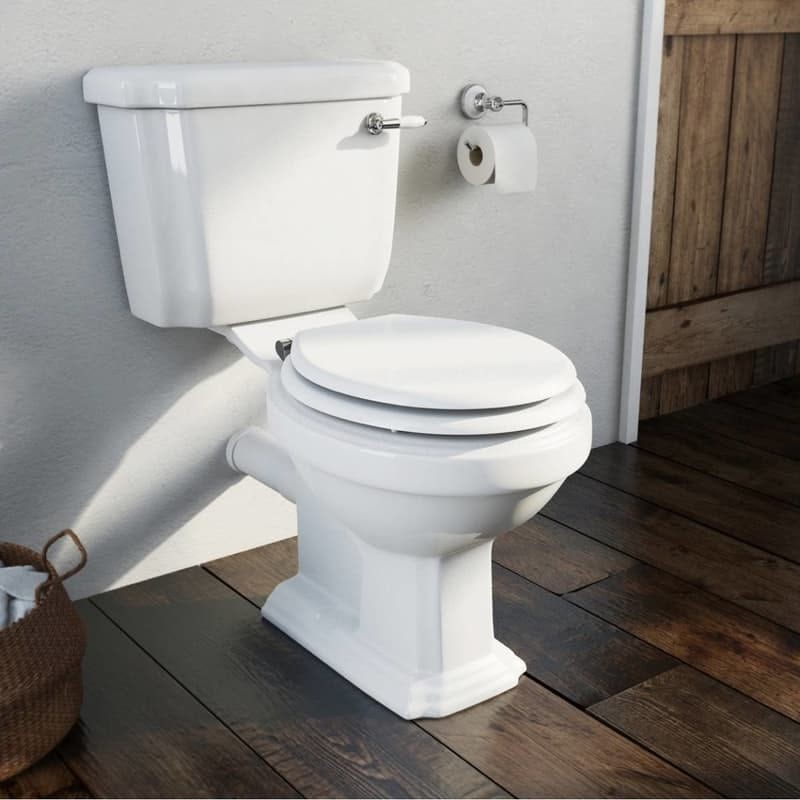 Even traditional style toilets, like the Dulwich close coupled toilet (pictured above), come with soft close seats as standard

Why do toilets have toilet seats?

Toilets are designed with toilets seats to reduce the transfer of germs from person to person. Whether it’s in the workplace, a public space or at home, multiple people will be using the toilet which means it will be home to a variety of bacteria. It’s why keeping the toilet clean is so important as the average toilet seat contains around 300 bacteria per square inch. Sitting down on a toilet seat creates a barrier between you and the contents of the bowl (which on average has over 3 million bacteria per square inch). Using the seat also keeps the bowl itself cleaner, as any mess will fall on the seat so it can be wiped away, with the bowl underneath remaining protected.

A toilet seat is also more comfortable than sitting on hard, cold porcelain, so you can focus on the real reason you are there, rather than it feeling like an inconvenient, painful experience you can’t wait to get over.

Why do toilets have toilets lids?

Toilet lids also play their part in the design of a toilet. Whether or not you choose to open or close the lid is very much a matter of personal choice, with some believing that leaving it open can aid the spread of microscopic particles (known as toilet plume).

For others keeping it open or closed can be simply be a stylistic choice. But a toilet lid also has a practical reason for being there. Closing it can prevent items perched on the cistern or shelving above from falling in, and, to state the obvious, it also reduces the impact of nasty niffs!

For a highly contemporary look, many people now opt for a slimline toilet seat, like this one (pictured above) which comes with the Derwent compact close coupled toilet

According to a bathroom survey we conducted, a loose-fitting or broken toilet seat is one of the most common bathroom issues and can go unfixed for months or sometimes even years! So, what steps can you take to remedy the situation?

First things first, it is always a good idea to measure your toilet for your seat. That way, you know exactly which size of toilet seat to go for.

Once you have the correct shape and dimensions in mind, why not browse our toilet seat buying guide, where we’ll take you through your options. Finally, once your purchase has arrived, check out our toilet seat fitting guide for step-by-step instructions.

Time to replace your toilet seat?

If it’s high time you finally replaced your toilet seat, you’ll find a high quality range at Victoria Plum, from classic wooden designs to smart modern models. Simply click on the image below to begin shopping.

Posted by Adam Chard in Latest News | 1 year ago