Home improvements: Your complete guide to a Victorian home

Whether you’re considering moving to a Victorian home or simply looking for sympathetic refurbishing tips, we explain everything you need to know about these gorgeous period properties.

According to estimates, roughly 10% of all British housing stock dates from the Victorian era and, if you are lucky enough to own and live in such a property, you’ll know just how chockful of character a Victorian home can be. However, when it comes to refreshing the more functional areas of your property, like the bathroom or kitchen, your Victorian plumbing system and room layouts can often cause issues. Even updates to the living room and bedrooms can pose problems which you won’t come across in more modern homes.

In this guide, I’ll explain what a Victorian home is, show you which original features to look out for and offer advice on improving each of your rooms. 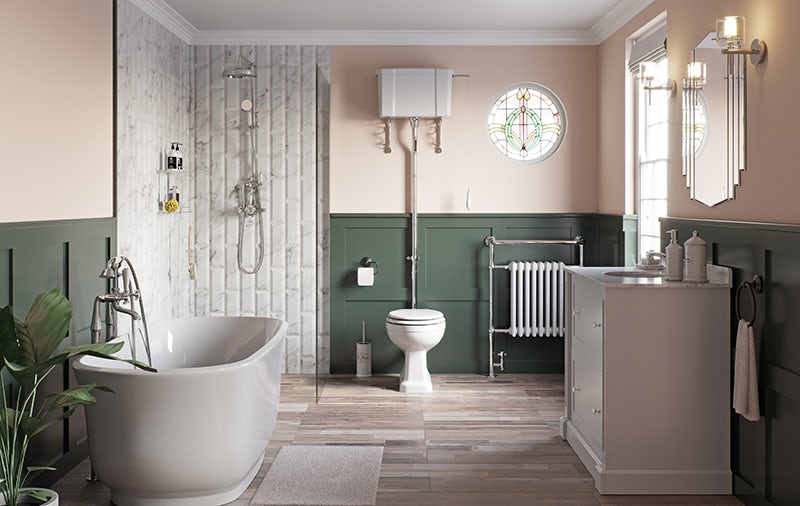 What is a Victorian home?

A Victorian home is one which was built during the reign of Queen Victoria (1837 to 1901), although it can often be applied broadly to any point during the 19th Century. This was a time of great social upheaval, with thousands of people migrating from the countryside to the towns and cities in search of work, therefore it was a period of largescale homebuilding, dictating the visual style and layout of homes well into the Edwardian and post war periods.

What are the features of a Victorian home?

Much like today, Victorian homes came in all shapes and sizes, from grand townhouses, where a single family would live with servants, right down to back-to-back terraced houses where a single room could be shared by several families.

Many different styles of home were built during this period, with architects looking to earlier periods for inspiration. For example, there was a broad mix of Italianate, Tudor and Elizabethan styles emerging, however it was Gothic-inspired designs which proved most popular (with the Houses of Parliament, which were completed around 1870, being an extreme example!), with romantic turrets and mock fortifications really making “an Englishman’s home his castle”.

Despite the disparity in social classes and their housing, Victorian homes had many broad similarities and, if you are in the know, it is easy to spot some of the tell-tale signs, which I have listed below:

Around the middle part of the century, tiled floors became a very popular addition to the Victorian home, especially in hallways and even the exterior of the house, to create a grand entrance and impress friends and visitors alike.

The rise of manufacturing and mass-production meant that home decorating saw a boom in the middle of the Victorian era, even amongst those who earned a modest wage. Geometric and encaustic tile designs (where different colours were inlaid) became common in even the humblest of Victorian homes. Meanwhile, wallpaper gained popularity as a wall covering, available in a wide variety of designs, from simple motifs to floral patterns. 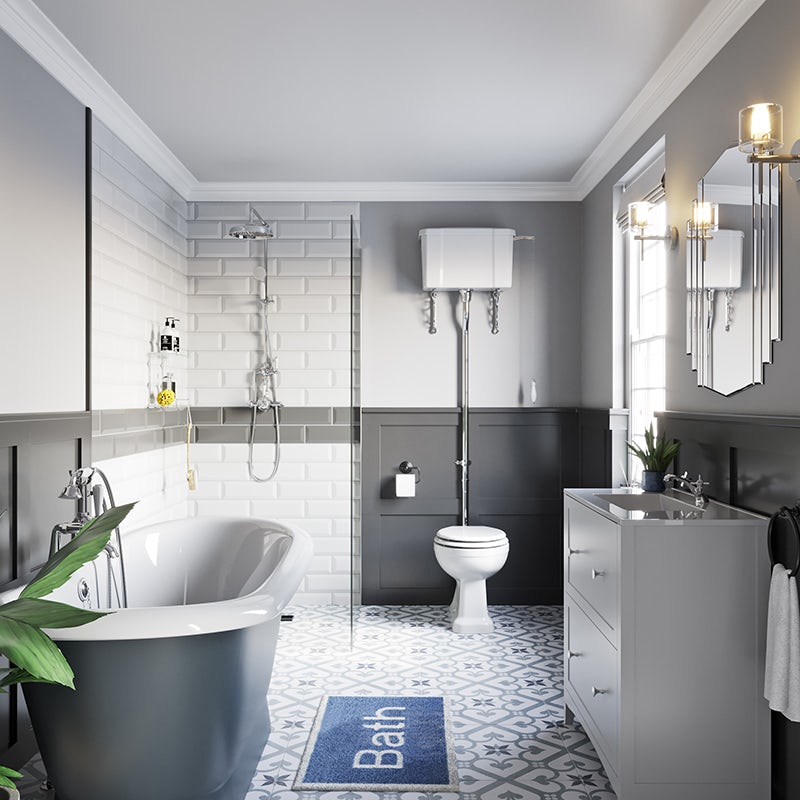 It wasn’t until the 1880s that electricity became a viable option for homes, and even then, only very, very few privileged households were fitted with rudimentary electric lighting. So, for the majority, oil, gas or candles were the only ways to keep rooms illuminated throughout the Victorian period.

Chandeliers can be used in period properties to bring a sense of opulence and grandeur to the home, with metallic finishes and crystals reflecting and refracting light around the room.

It wasn’t until the latter part of the Victorian era that radiators first started to make an appearance in British homes. The invention of the “Bundy Loop” by a gentleman named Nelson H. Bundy in 1872 paved the way for the modern radiator and central heating systems as we know them.

However, for the general populace, coal-burning fires were the only ways to keep their homes warm. That’s why you’ll often find several fireplaces in Victorian homes, not just in the downstairs rooms, but also in bedrooms and even, sometimes, in bathrooms!

In grander Victorian houses, a kitchen range would’ve been used for both cooking and keeping the house warm. Servants would be employed to “keep the home fires burning” as it were.

These days, you can find a wide range of traditional radiators which complement vintage décor perfectly. In fact, many homeowners turn to Victorian radiators to modernise and accompany contemporary décor. 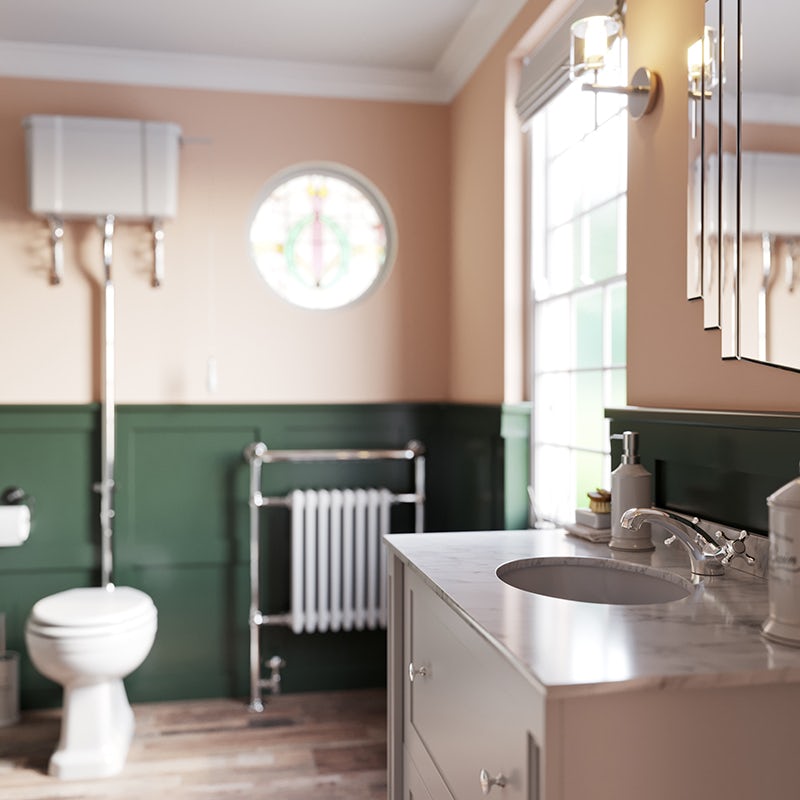 With open plan living becoming fashionable and desirable in the latter part of the 20th century, in modern households we often blur the boundaries between living spaces, dining spaces and even kitchens.

The Victorians tended to have specific rooms for specific activities and, depending on how large and luxurious the house could be, this could extend to several rooms throughout the property. The average Victorian home could expect to have a reception room, which was used strictly for formal occasions, containing all the finest furniture and luxurious objects, like china, to show off to anyone entering the property.

The family living space was more likely to be found in a back room, gathered around a fireplace, where families would keep warm. If there was space, a separate dining room would be used for the evening meal or, more often than not, the dining table would be in the same room as the living space.

In Victorian times, when things were pretty drab and grey, materials were often rich and colourful, full of texture, with glittering metal accessories in a variety of intricate designs. The ceilings in these living spaces were commonly higher than those found today, to promote a feeling of grandeur, often complemented by cornicing and wooden panelling.

It may surprise you to discover that the “bathroom” simply wasn’t a concept, except in all but the most exclusive Victorian homes. The bathroom in its current incarnation is a relatively modern phenomenon, only really gaining prominence in the post war years.

However, during Queen Victoria’s reign, which spanned a truly regal 64 years, improvements and technological advancements set the course for the development of the modern bathroom, not least with Victorian plumbing allowing for new toilet, basin, tap and bath designs.

The 1848 Public Health Act in England was a major turning point in improving sanitation and the health of the general populace. It aimed to provide clean drinking water, drainage and sewers, and the removal of all refuse from homes and streets. A further amendment to this law in 1975 added further impetus to this movement.

Despite this, only the very wealthy could afford to have water piped into their homes and Victorian plumbing was quite rudimentary in its design and function. Until major modern sewer systems were created (London’s was completed in 1866) there was nowhere for human waste to go, meaning toilets were quite impractical. Many homes had access to an outdoor privy (a toilet pan over the top of a pit), often shared with other households. Chamber pots were also used and emptied out in the morning.

With the creation of the sewers, Victorian plumbing finally had somewhere to dump its load and patents for flushing toilets soon followed, the most famous being those of the man with the famous surname, a certain Thomas Crapper. Vitreous china soon became the standard material from which toilets were made and the high level cistern made flushable toilets a viable option for homes. 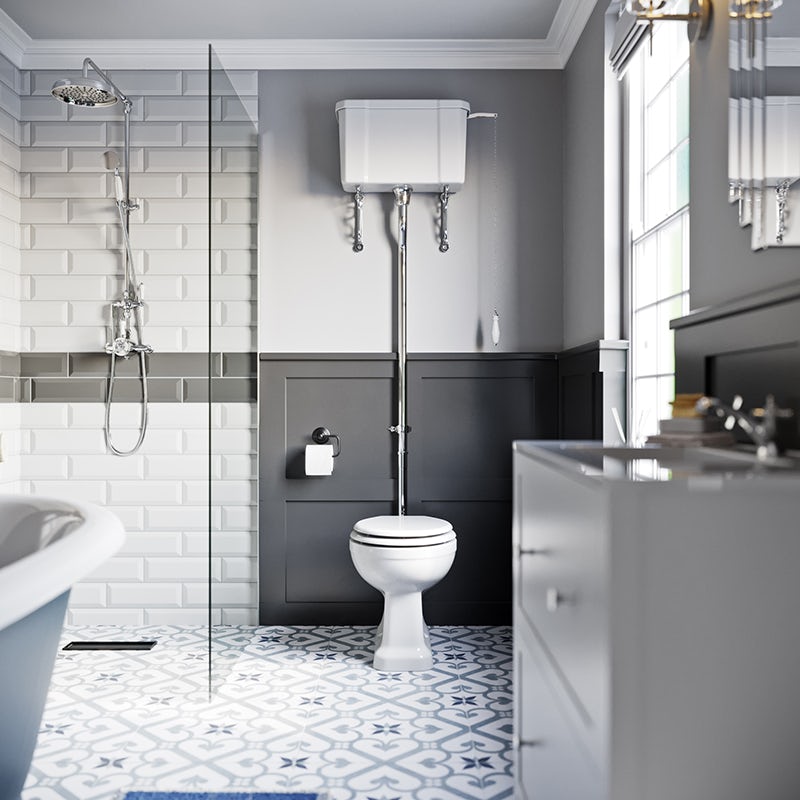 For washing purposes, many wealthier households contained a freestanding bath which, unless there was some form of Victorian plumbing available, would be filled by servants. Freestanding tubs had been around since Georgian times, but Victorian designs were becoming more elaborate and decorative, usually with a “roll top” which made getting in and out of the bath a more comfortable experience. Bateau style baths (often known as slipper baths) with one end higher than the other, offered a modicum of privacy for the user, which was often welcome with servants coming in and out.

For the working classes (or “the great unwashed” as they were often, impolitely, referred to), washing was an infrequent activity, at least by our modern standards. Public bathhouses, where people could wash themselves and their clothes for a small fee, became established during the middle of the 19th century. Meanwhile, the tin bath could be used for the weekly wash with water having to be retrieved from a communal pump and heated in a kettle.

It wasn’t until the very end of the Victorian period that bathrooms became a more common sight in homes, although it would take another 50 years or so before this humble little room really came into its own. 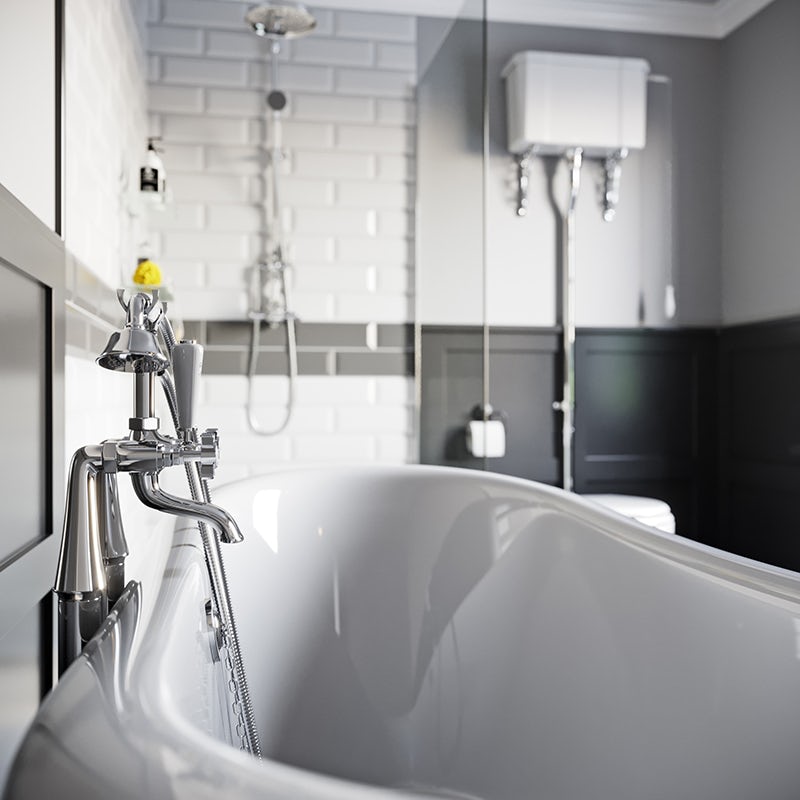 Victorian kitchens obviously differed greatly depending on the size of the home and the wealth of the homeowner, although there are many things which would make it seem alien to the kitchens of today.

As we have mentioned before, Victorian plumbing allowed for fresh water to be piped in and waste water to be piped out of an increasing number of homes, allowing for innovation in washing and food preparation. The kitchen sink soon became a permanent fixture, along with the cooking stove or range.

Whilst modern homes tend to have fitted kitchen units around the perimeter of the room, Victorian kitchens almost had the reverse of this. A large wooden table usually sat smack bang in the middle of the room and this was where all the preparation took place. In poorer homes, this could double as the dining table. 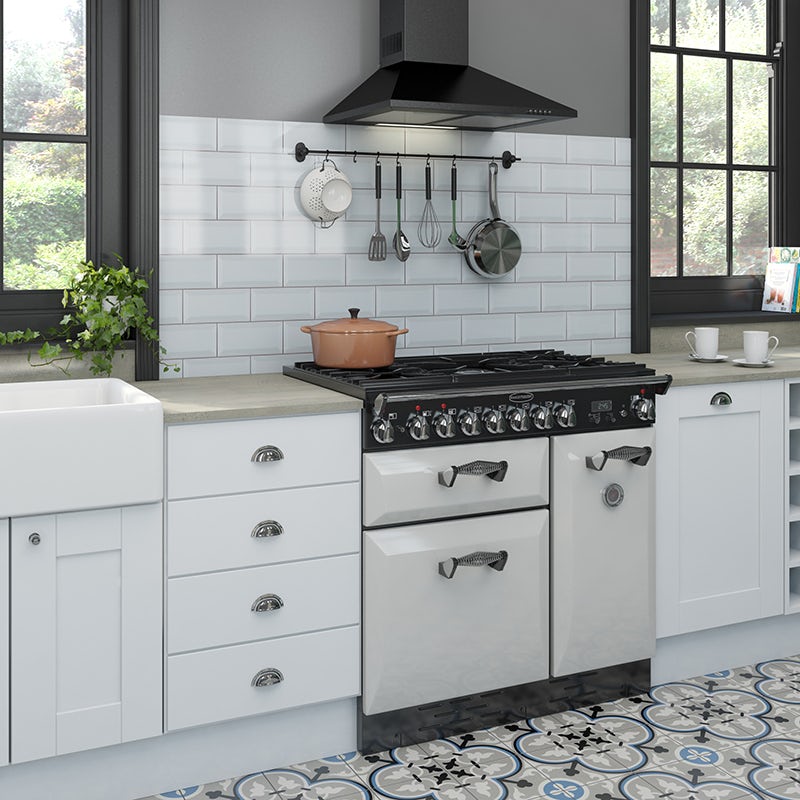 Cabinets, dressers and drawers would be used to store all the essential items, like cookware, cutlery and crockery. However, unlike today, these would not have been “fitted”—meaning Victorian kitchens could appear very busy and cluttered.

To replicate the look of a Victorian kitchen, a more inward-looking design is desirable, with a central food preparation area. Fitted furniture can still be used but look for worktops with the appearance of wood or stone and more traditional style units.

Depending on the wealth of the household, Victorian bedrooms ranged from the ornate to the downright functional. However, we would still easily recognise many similarities between bedrooms of that era and those of today, namely the bed itself and the furniture surrounding it.

Victorian beds gradually became less ornate than their predecessors, with four poster beds being replaced by more open styles. Iron and brass bedsteads, along with advances in mattresses and bed linen, meant that the average Victorian could sleep easier than their Georgian ancestors.

Thanks to mass manufacturing of items like carpets, even the middle classes could enjoy a bit of comfort and warmth underfoot, whilst thick drapes could help keep out chilly draughts during the colder months. Without central heating, many bedrooms also featured a fireplace.

One feature that has become less common in modern times is the washstand, where a typical Victorian may have enjoyed a daily wash or shave, complete with handy towel rails. You can easily replicate this look with a modern washstand and basin.

If you’ve enjoyed reading about Victorian homes and how to improve them, follow us on social media by clicking on any of the buttons at the foot of this blog post. Throughout 2021, we’ll be adding further articles showing you how to improve period homes, complete with style tips for bathrooms, kitchens, cloakrooms and more.

Posted by Nicky Kingston in Inspiration | 2 years ago

Nicky is our resident Stylist and loves bringing new and exciting bathroom trends to life. Nicky’s passion for design led to a 1st class degree in Surface Design & Textiles, before earning a reputation as a home stylist in London.