Spreading warmth around the world: The history of the radiator

Ever wondered how modern heating came to be? We take a look at the history of the radiator from primitive methods to modern technology.

In today’s modern world it’s easy to take many of the home comforts we have for granted. Basics such as running water and electricity were not always available in every home (and still aren’t in some parts of the world) and the same applies to heating systems.

Now they come as standard and virtually every property relies on radiators to warm them through the autumn and winter seasons. Yet we barely even notice them as they blend into the backgrounds of our lives. But how did we get to this point and where did the life of the humble radiator begin? Read on to find out everything you need to know about the history of the radiator.

Believe it or not the story begins in an area of the world we now refer to as Ukraine. Historians believe the first steps made towards creating heating for humans started approximately 420,000 years ago.

Neanderthal man came up with the first heating system, building hearths made out of Mammoth bones and sealed with a grass roof. Quite remarkably, not only could they contain fire, but they were also mobile, allowing early man to keep warm on the move.

Over in Korea, around the Bronze Age, locals were relying on a system called an Ondol. Heat generated from burning wood and smoke underneath a masonry floor would warm the room above. This would travel through an underground flue that would help direct the heat through the floor for the occupants above to enjoy.

This was a 2-for-1 system, as the kitchen fire used to cook household meals also doubled up as the fuel source to heat the house. While the system was nowhere near as efficient as those we use today, it does prove that humans were conscious of making the most of their energy sources thousands of years before it became such a hot topic.

The next notable development in radiator technology was overseen by the Romans. As we already know, they were quite the innovators, responsible for the construction of thousands of miles of roads across mainland Europe and inventing guttering systems for waste disposal in the UK.

The Romans were also responsible for taking heating technology to the next stage through the creation of the hypocaust. A hydraulic engineer by the name of Sergius Orata is credited with inventing this home invention, which worked in a similar way to underfloor heating.

This was done by circulating smoke and hot air through an enclosed area underneath the flooring to heat up the room. Flues constructed into the walls would allow the smoke to escape, thus avoiding everyone from suffocating in the process. It was a system that required a lot of hard work, however, as it relied on fuel resources constantly being topped up in order to remain in operation.

Next up, it was the Russians’ turn to take the heating system forward to the next level. Similar to the Ukraine (once part of Russia) temperatures in the region are usually very low, which no doubt incentivised the need to find sustainable heating sources.

Out of this came a water-based heating system that first found a home in Peter the Great’s Summer Palace in Saint Petersburg in the early 1700s. It relied on solid fuel burning boilers to create the energy that was pumped through porcelain ducts.

Despite the Russian innovation in engineering, it was the turn of the Americans to take the story of the radiator to the next level. It was none other than Benjamin Franklin—one of the country’s Founding Fathers—who created the next great invention.

Franklin made a metal-lined fireplace in 1741 which significantly increased the amount of heat that could be transferred into an interior living space. It featured something called a hollow “baffle” that consisted of a metal panel crafted to direct the fire fumes and a flue that acted as a sort of siphon.

It was actually an upgrade on a system previously used in Germany a century earlier, except the burning of fuel was far more efficient due to a new design that elongated the path taken by the fumes. In turn, this produced more heat as it took longer for the fumes to escape and eventually evaporate. 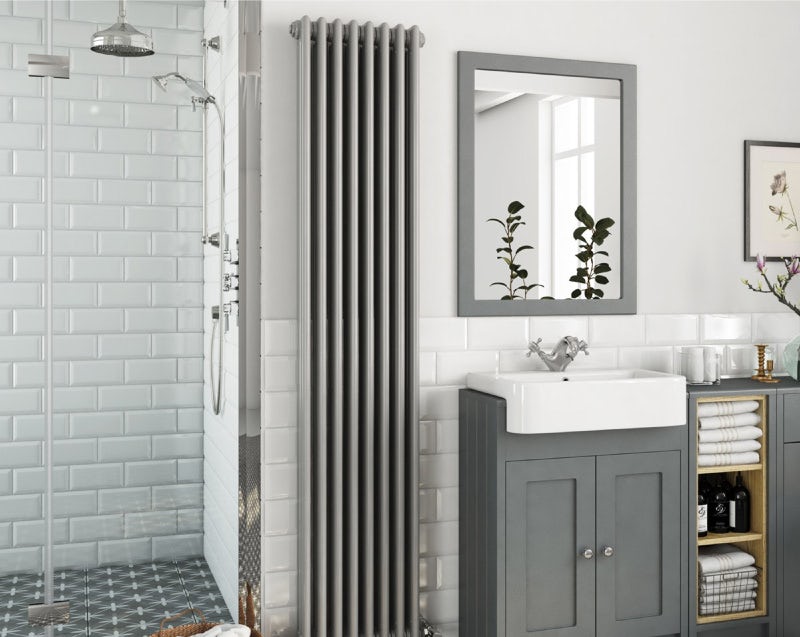 These days, radiators come in a variety of shapes and sizes, including space-saving vertical designs

Jumping forward to the end of the 18th century and British technology had evolved enough to contribute to the evolution of home heating. Once again it revolved around the concept of steam heating, with Matthew Boulton and James Watt—2 renowned marine and stationary steam engines manufacturers—becoming involved. Steam heating systems were installed into their private homes, with Watt even putting together a crude version of a radiator using soldered copper.

It took some time for the idea to catch on and it wasn’t until it was exported to America that it really started to flourish. After 1810 a growing number of the systems began to be installed into larger properties, with the most notable being the White House and the Capitol Building in Washington.

However, it took another few decades until it started to find its way into regular homes. Thanks to Stephen Gold—a stove maker from Connecticut—the first radiators began to take shape and the idea of heating in the home began to become a realistic option.

Known as the “mattress radiator”, Gold’s invention became the standard model that remained in use until the end of the 19th century after initially being created in 1854. Once manufacturers became familiar with the engineering required, new radiators and boilers of various shapes and sizes slowly began to emerge. Many of them were quite grand in design and would take up quite a prominent position inside the properties they were installed into.

As with many big inventions, there is some dispute over who was responsible for creating the radiator as we know it today. Some believe it was invented by a Polish-born Russian called Franz San Galli. The creation of the heating radiator is attributed to him, although with Gold’s patent dated as early as 1854 and one or two others reaching back to 1841, there is a belief it all began in America.

The evolution of the modern radiator

So where does the “modern” radiator fit into this story? In 1872, a gentleman called Nelson H. Bundy created what came to be known as the Bundy Loop. This now serves as the basic concept for what we understand as the radiator in the modern age.

The idea was to run on a steam-based system using cast iron loops screwed into the base. And it quickly gained popularity. In no time at all, a number of other manufacturers picked up on the idea and started to embellish it with their own aesthetic alterations to gain a foothold in a fast-growing market. The likes of Joseph Nason and Robert Biggs began to advance the designs and set the template for some of the radiators we still use today.

It was during the Victorian era that the radiator really started to become commonplace, with more and more manufacturers coming into the market and the technology becoming increasingly accessible for use in the home.

Over in America, The America Radiator Company took hold of the market and began to dominate sales. Not only were they supplying domestic radiators, but bathroom-related fixtures and fittings that were made available all across Europe. By the start of the early 20th century—with the help of J.P.Morgan—the company had established itself as one of the largest manufacturers in the Western world. 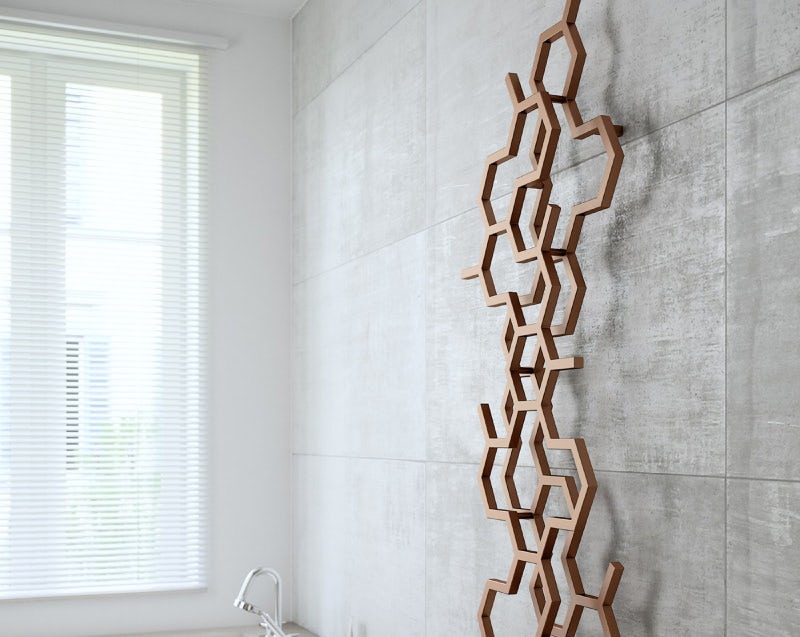 The installation of radiators

One thing that continues to confuse many people is the positioning of radiators in older properties. In many cases, they were installed directly underneath windows, which appeared to defeat the purpose of having a radiator in the first place. But there is some logic behind this and it may not sound as impractical as you may first think.

Before double glazing became as commonplace as it is today, most properties relied on single glazing. As you could imagine, this meant lower levels of energy efficiency and often meant the area surrounding the window was the coldest spot in the room. The idea behind installing radiators underneath the window was to find a balance between the heat being produced and the cold draft coming into the room from outside through the window.

The introduction of double glazing means that property developers can now install radiators elsewhere in home. However, installing a radiator underneath a window is still a popular option as it tends to be an area of the room where furniture is not positioned, freeing up the rest of the space for use and ensuring the heat produced by the radiator is not blocked and reduced.

Where the technology was once rather crude and far from the sleek, stylish designs we have become accustomed to today, it was the development of the radiator during the Victorian era that allowed manufacturers to find the right balance between style and functionality. Instead of radiators being large, clunky contraptions bogged down with pipes and metal, the invention of the Bundy Loop allowed designs to become more cost-effective for mass manufacturing.

Cast iron was the most commonly used radiator material in the UK up until the 1970s, until manufacturers transferred to using steel—at a time when the material was at peak use on these isles. However, cast iron is still preferred by some as it can retain heat for longer periods and you can even buy steel radiators that have been manufactured to replicate the look of cast iron.

The retro styles that were once commonplace in period properties still have a place in today’s world. Homeowners who prefer to decorate their interiors using classic designs embrace their unique character and classic-style radiators that use modern technology can look still look fantastic.

What the future holds for the radiator is hard to tell, although we imagine their reliability will ensure they remain the dominant source of heating in our homes for quite some time yet. While new technology is appearing all the time, it remains unaffordable to many, and with radiators playing such an integral role in all our lives today we always know that the heating and comfort we need is only ever a touch of a button away.

Find out more about the history of the bathroom

We’ve loads more fascinating articles on the history of the bathroom. Simply click on any of the links below to find out more.

Find out more about radiators and heating

If you’d like to find out more about radiators and other forms of heating for your home, check out some of the resources available at VictoriaPlum.com.

At VictoriaPlum.com, you’ll discover a huge range of heating options for your home, including designer radiators in a variety of styles and finishes, all at affordable prices. Shop radiators today by clicking on the image below.