Everything you need to know about how a toilet cistern works

Learn the ins, outs and everything in-between of the toilet cistern—perfect if you need to do a spot of toilet troubleshooting.

Is the flush on your toilet playing up? Is something malfunctioning beyond your control? Does your bathroom plumbing need looking at? Before rushing to phone a professional, have a little look at the cistern as often, this is the main point of failure. the question is, how does a flush toilet actually work and what is a cistern?

A cistern is a large, often rectangular, tank that holds the water that the toilet uses to flush the waste into the sewage system. There are a few different kinds of cistern and flush systems that impact how your cistern works, but many cisterns in our homes and offices operate on the same basic principle of using gravity to flush the toilet.

By understanding the individual toilet parts and their specific function, you should hopefully be able to better diagnose the issues that occur when something isn't working. You may even be able to perform a simple do-it-yourself fix that’ll save you money on a plumber.

The different parts of a cistern

Inside the cistern, there are a few main components that serve either one of two functions: to flush and refill the cistern. The parts that help flush the toilet in a cistern are the plug and the handle/button to which it is connected, commonly by a lever. The toilet fill valve and float valve are what help control the refill action of the cistern, and the water feed pipe is the pipe that supplies the water for the refill action.

How does the flushing action of a cistern work?

Most toilets are what’s known as gravity-fed toilets. This requires that the cistern is above the bowl in some manner, from anywhere from just a foot to all the way to the ceiling (as with a high level toilet), depending on how new your toilet is. At the bottom of the cistern, there is a hole that allows water supply in the cistern to flow through and is kept closed by a plug. This plug will be lifted when the flush handle (or button) is used and the chain or lever attached to it lifts it, allowing water to rush through the hole rapidly. Keeping the cistern above the bowl of the toilet allows the water to rush downwards with the force of gravity alone, meaning that no external pumps are needed and keeping the system simple and low maintenance while also providing sufficient flushing force. The force of the flush generated by the water rushing down the distance from the cistern to the toilet bowl is referred to as the gravitational head of the flush charge.

There are many different kinds of flushing systems and flush valves that are available when choosing the kind of toilet you want, but many options operate on the same basic principle of using creating fast-moving water to flush the waste down. For example, certain toilets give you the option to "half-flush" for liquid waste and "full-flush" for solid waste. You can find out more about how dual flush buttons work in our in-depth article.

With a wall hung toilet, like the Cooper from Mode Bathrooms (pictured above), the cistern is concealed neatly behind a false or stud partition wall

How does the cistern refill after a flush?

When the toilet is flushed and the water in the cistern leaves, the float valve will sink, causing the refill and inlet valve to open up. When the refill valve is opened, water flows from the water pipes and enters the cistern, filling up the cistern. The water will continue to enter the cistern until the plug covers the hole, stopping water from flowing out, and when the water in the cistern reaches the designated water level. At the designated water level, the float valve will be lifted up high enough to close the refill valve, stopping water from entering. The toilet is then ready for the next full flush!

Which cistern placement is best?

Many cisterns are placed directly above the toilet bowl, but there are other options to consider. Many who have smaller bathrooms and wish to maximise space will opt to conceal the cistern away from view. These types of cisterns are normally hidden in a wall cavity and supported by external frames. The various flush pipes and water refill pipes are then rerouted to accommodate the different positions of the cistern. Though this creates a visually more open bathroom, this also makes working on them more difficult as there will be limited access to them without a significant amount of work. If you intend to work on your toilet by yourself the majority of the time, you may want to consider other options. 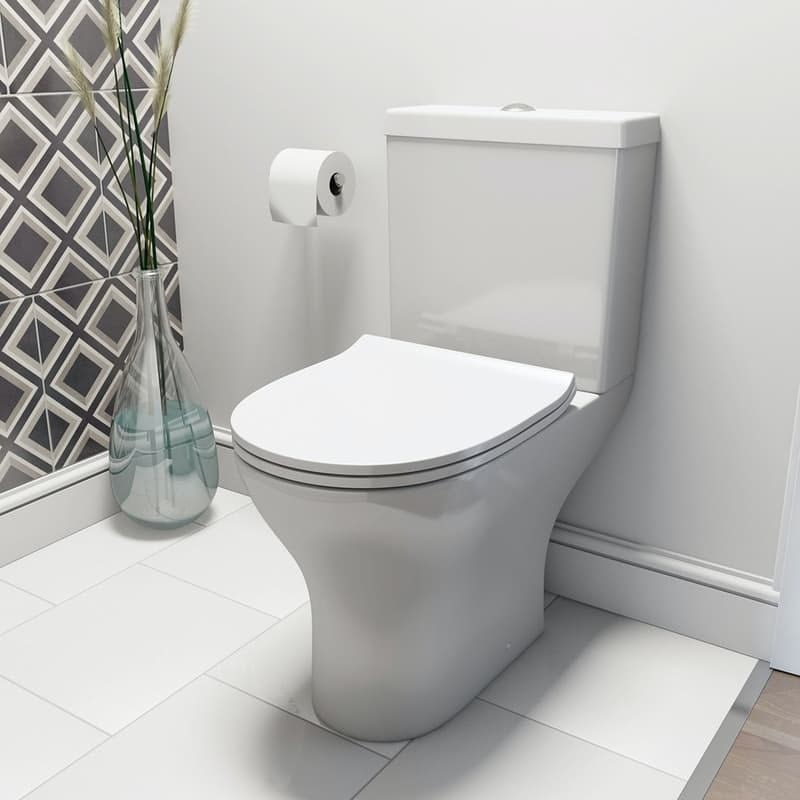 Modern designs, like the Derwent round compact close coupled toilet from Orchard Bathrooms (pictured above), come with slimline cisterns which help save on space

With some basic information, you should be able to have a quick look at your toilet cistern and understand what the problem could be. Although some issues may be complex, for minor malfunctions, you may be able to fix it yourself with some carefully followed instructions.

Whatever type of toilet you're after, check out our expert guides before you buy.

Posted by Rebecca Doody in DIY Advice | 1 month ago