00d 00h 00m 00s
Trade account Design and Installation
Latest News Which songs do you like to sing in the shower?
Latest News

Which songs do you like to sing in the shower?

Whether you enjoy a bit of soft rock as you soap up, or perhaps some R&B with your R&R, the shower is the one place where you can really let your hair down and sing to your heart's content.

There really is nowhere on Earth (not even the Albert Hall!) that matches your bathroom for acoustics. The variety of hard surfaces, and a distinct lack of tune-muffling soft furnishings, makes it the ideal place to loosen up those vocal chords and indulge in one of life’s simple pleasures.

But what is Britain’s favourite song to sing in the shower? Luckily for you, we found out… 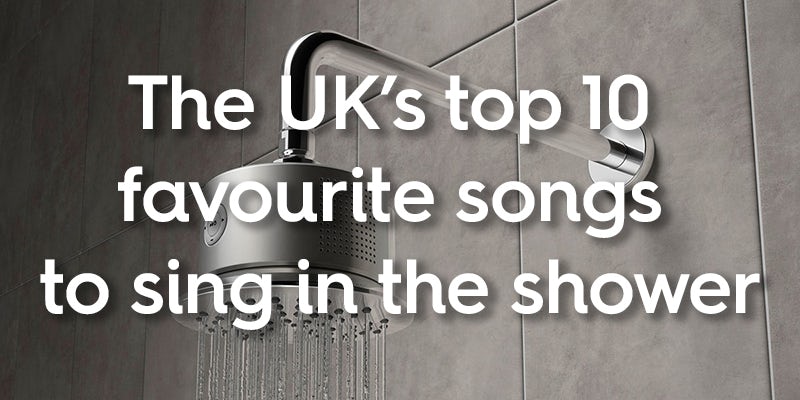 The UK's top 10 favourite songs to sing in the shower

We surveyed over 450 VictoriaPlum.com followers, asking them which songs they like to sing in the shower. The results were quite varied, but some firm favourites began to emerge.

So, here are the UK's top 10 favourite songs to sing in the shower, as nominated by VictoriaPlum.com followers. Can you guess who made it to the coveted No 1 spot?

At a whopping 6 minutes long, you'd better ensure you have a good supply of hot water available when singing this one in the shower. Part of Queen's A Night at the Opera album, the song is full of theatrical highs and lows, with an incredible guitar riff which was made famous to a whole new generation of music fans in the 1992 film "Wayne's World". A couple of things you might know about Bohemian Rhapsody: The piano used in the recording was the same one used for The Beatles Hey Jude and it is, to date, the only song to have been Christmas No 1 twice with the same original recording, in 1975 and 1991.

"Woah-oh! We're halfway there." Well, those lyrics aren't truly accurate, as we've only just reached number 9 in our countdown. However, long-haired 80s rockers Bon Jovi make it into your top 10 with this belter of a rock anthem. 3.5 million digital downloads and a music video which has been viewed over 350 million times, it's not surprising this is such a popular shower time song.

With a song which focuses on the topics of nostalgia and regret, it does seem that many of you like a little blub when you're in the shower. But with such emotional lyrics and the powerful Adele vocals to sing along to, no one would blame you for letting that stiff upper lip drop for a few minutes.

You've chosen a contemporary song at number 7. Recently nominated for the Mercury prize, Ed Sheeran has become a global sensation; a far cry from busking on street corners! Shape of You was released in 2017, along with Castle on the Hill, and its popularity has led it to become the 2nd most streamed song on Spotify (just behind Drake's One Dance).

It's a second entry into the shower singing charts for Queen with I Want To Break Free and it's not difficult to see why this is such a popular song for the shower. With nobody around to see it, you can let your inner air guitarist loose, as you chop out the Brian May solo on your imaginary axe. Even the lyrics speak of liberation, so why not cut loose for a few minutes?

From the 2016 animated movie Trolls, JT comes up with another feelgood classic that has had us all singing along in the shower. A modern disco song to go along with the film's upbeat soundtrack, it has received a number of accolades, including a Grammy and an Oscar nomination. Additional vocalists sing along to the version used in the film, including James Corden, Anna Kendrick, Zooey Deschanel and Gwen Stefani.

If there was an award for the most appropriate song to sing in the shower, this one would surely win. Making the link between falling water and singing, Gene Kelly's classic song is a joyful, tuneful medley that speaks of happiness in the face of adversity. Plus, as the theme of the song is rain, it's something that clearly resonates with us Brits!

This upbeat 80s track reminds me of white T shirts with sassy slogans, and of course, the late, great George Michael. Reaching No 1 on both sides of the Atlantic, it is surely one of the most instantly recognisable pop songs of our era. The title itself was inspired by a note Andrew Ridgeley left for his parents, where he had accidentally written "up" twice. The energetic nature of this track and the lyrics about being woken up, make this a firm favourite for that early morning shower.

A summer tune with "Happy" as the title? What isn't there to love about this soulful ditty from Pharrell Williams. Made for the Despicable 2 soundtrack, Williams' falsetto lyrics makes this an easy song to sing along to, for boys and girls alike, so it's no wonder that it was the most successful song worlwide in 2014. I'm feeling happy just writing about it!

With over 10% of the votes, this rip-roaring tune from 1982 is your No 1 song to sing in the shower! Selling over 6 million copies worldwide, it has been covered by such illustrious names as RuPaul and, more notably, Geri Halliwell, featuring in Bridget Jones's Diary. It has since gone on to become a true anthem right around the globe. Admit it, you can almost imagine yourself singing it in the shower right now, can't you?

And there you have it! Britain’s shower-time top 10. The next time you jump into the shower, why not have a listen to our "Singing in the Shower" playlist?