What is a mixer tap and is it right for your basin? With this handy guide, we’ll help you pick the perfect model from our comprehensive range.

Whether you’re looking for a mixer tap to complete your bath, basin or kitchen sink, we have a beautiful selection of designs to choose from.

By reading this buying guide, we’ll give you a quick and easy introduction to the basin mixer taps available at Victoria Plum, so you can enjoy finding the perfect style and design for your bathroom suite.

If you wish to find out more about bath taps or kitchen taps, or need more general advice about household taps, please check out the following guides:

What is a basin mixer tap?

A mixer tap simply combines your hot and cold water feeds to flow out through a single spout, which can be controlled either by a lever or twin-handles. This means you can quickly and easily control the temperature of the water coming out of the tap.

What are the benefits of a mixer tap?

Unlike the more traditional separate pillar tap sets, a mixer tap can provide:

Handy hint: Take a look at further benefits of using mixer taps in the bathroom.

Is a mixer tap compatible with my bathroom?

All of our mixer taps are designed to be compatible with gravity fed, unvented high pressure or fully modulated combi boilers.

Your choice of basin will usually dictate the style of tap you can install, as it will come already drilled with either one or 2 tap holes. A single tap hole is designed to accommodate a mixer tap, while 2 tap holes is for the more traditional set up of separate hot and cold feeds.

Waterfall taps are very popular these days, as they allow the water to cascade gently into your basin, for a calming and highly relaxing effect. Find out more about them in our waterfall basin mixer tap buying guide.

Our wall mounted mixer taps are ideal for a space-saving option for your basin, and can really give your bathroom a contemporary look and feel with a dramatic waterfall effect.

Designed specifically for use with counter top basins, high rise mixer taps are taller than average taps, so they can be mounted to a vanity unit or work surface. Many of our most popular tap ranges also feature a high rise basin mixer tap.

Another great option for counter top basins is the high rise basin mixer tap, like the Wye tap pictured above

So-called, because they are primarily used in smaller bathrooms, like cloakrooms and ensuites, cloakroom basin mixer taps are simply smaller versions of some our most popular models. Designed to fit neatly with smaller basins, these compact taps work in exactly the same way as their slightly larger counterparts. 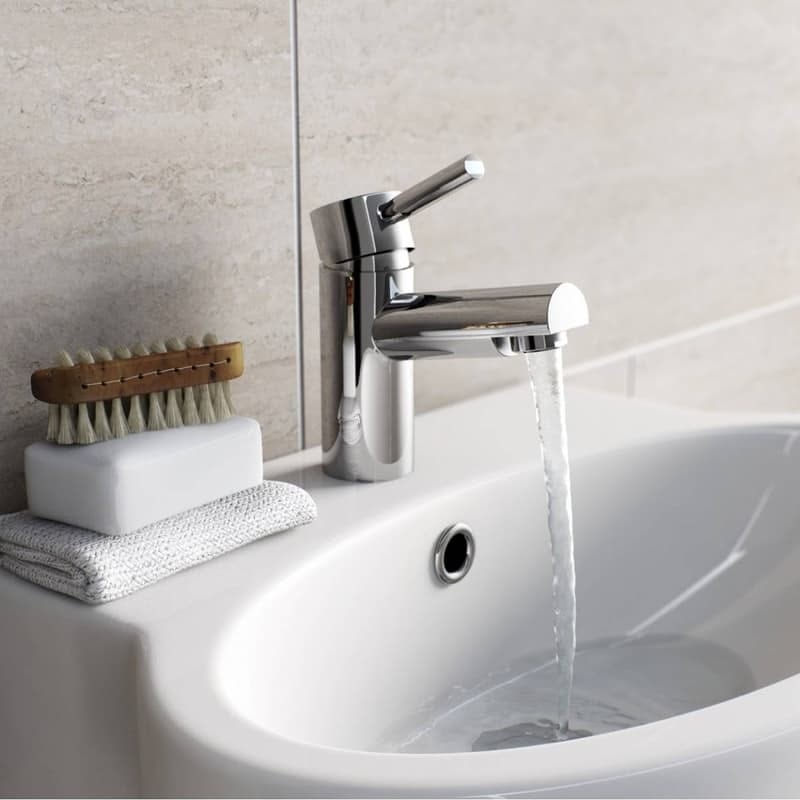 At just 130mm in height, 40mm in width and 110mm in depth, the compact Eden cloakroom basin mixer tap is perfect for smaller basins

Whilst there are many different types of mixer tap, there are broadly just 2 styles: contemporary and traditional.

Also often referred to as “modern basin mixer taps”, these designs are usually simple, sleek and unfussy, with clean lines and forms. Most contemporary basin mixer taps come with a single lever handle, but twin handle designs do exist. 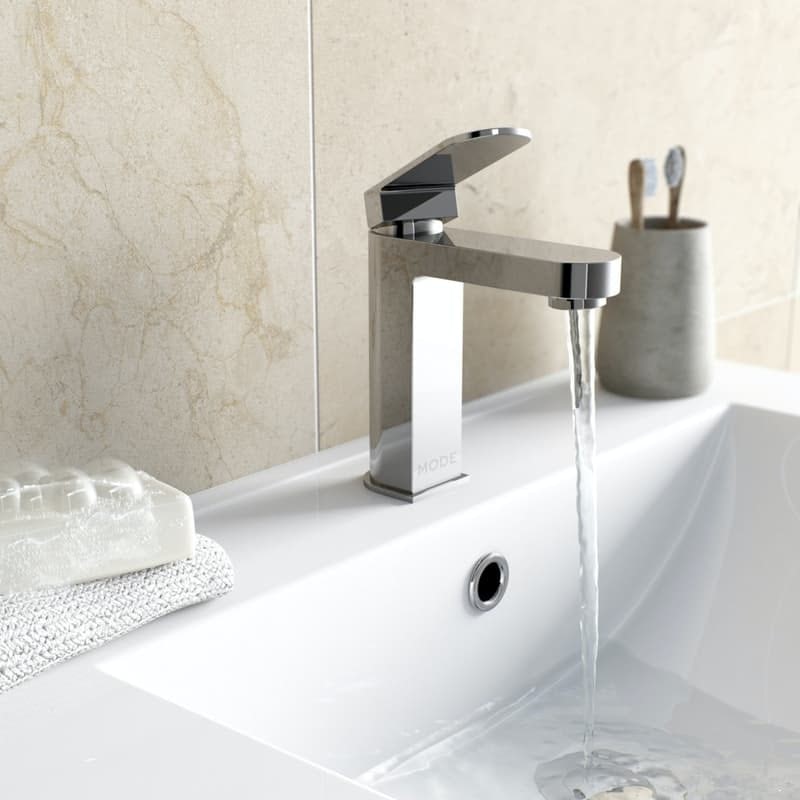 Featuring a combination of simple curves and straight edges, the Hardy basin mixer tap is a great example of contemporary design 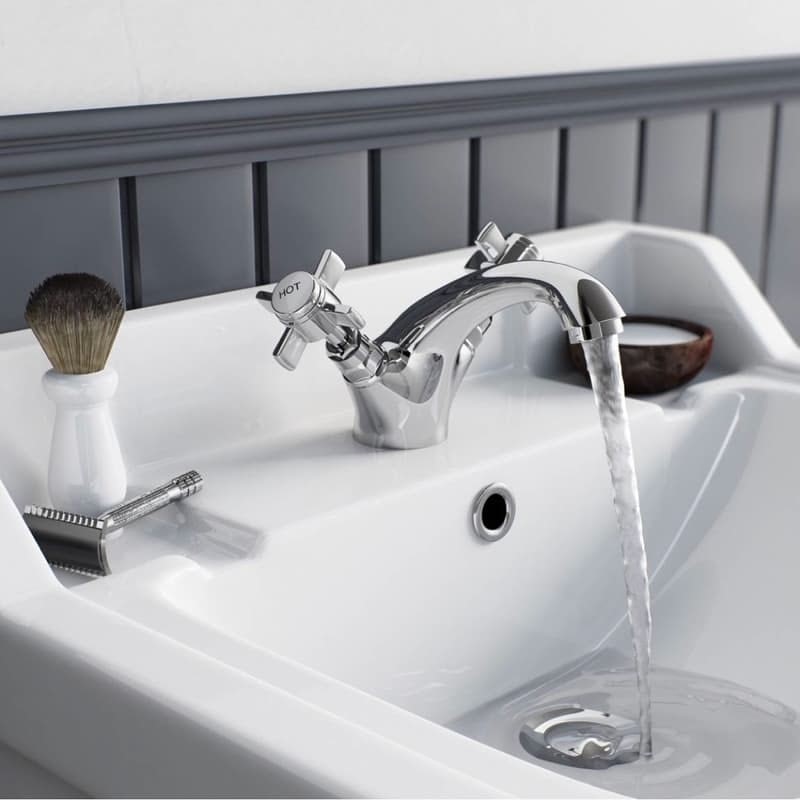 With a classic cross head handle design, the Dulwich basin mixer tap is the perfect accompaniment to traditional suites

For a long time, chrome has been the finish of choice when it comes to bathroom taps, and with basin mixers, there’s no exception. The vast majority of taps we sell come with a chrome finish. However, in recent years, more and more homeowners are turning to new metallic finishes like gold, brass, black and even white, to add accent colours to their décor. If you’re aiming to achieve a specific style, like an industrial or traditional look, it might be worth considering a special finish for all your brassware (taps, showers and pipework) and your accessories. 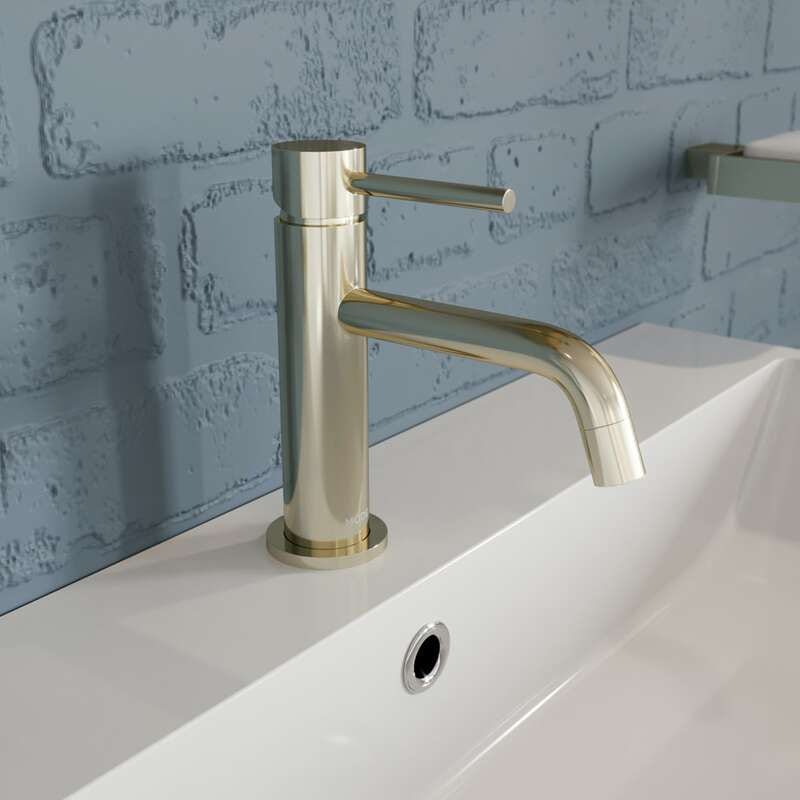 What else do I need to consider?

All of the products on our website are accompanied by a full specification, including:

It’s always a good idea to check these specifications carefully to ensure they meet your requirements.

The required size of your new mixer tap will likely be determined by the surface space available around your basin or bath. Look to the base diameter of your tap to make sure it will be suitable before you make your purchase.

How do I fit a basin mixer tap?

Fitting a new basin mixer tap or replacing an existing one, is one of the more straightforward bathroom DIY tasks. However, as it involves plumbing, you may feel more confident hiring an experienced Tradesperson to do this for you. If you'd like to attempt it yourself, check out our comprehensive guide to fitting a basin mixer tap, complete with step-by-step instructions and video.

How do I clean a basin mixer tap?

At Victoria Plum, you’ll find one the largest selections of basin mixer taps on the market. And what’s more, as we’re exclusively online, with no expensive showrooms or salespeople, we pass the savings on to you. We won’t be beaten on price. If you can find a like-for-like product, we’ll do our very best to match that price. It’s our price match promise. Why not browse our full and comprehensive range of basin mixer taps by clicking on the image below?

Posted by Adam Chard in Buying Guides | 3 months ago