Immerse yourself in the history of baths

Whilst you’re lying back and relaxing in your bath, why not take some time to appreciate this miracle of modern invention? We take you on a trip through time and discover the history of baths. And the best thing? You won’t even need to leave your tub!

It’s easy to think that baths have always existed because, well, as a species we’ve always had to keep ourselves clean. There is a perception that people who lived in ancient times weren’t too bothered about washing which is why disease was so rife. While there is some truth to that, humans have always tried to keep themselves clean using various methods—even if large-scale piped water wasn’t available until around the 18th century.

So what about the humble bath? When did that become such a common feature in people’s households? Read on and we’ll run through the history of baths right up until the modern day.

You’ll be forgiven for never having heard of the Indus Valley Civilisation, which is what we know today as Pakistan. As a people, they existed for a couple of thousand years between 3300 to 1300 BCE and were the creators of the first ever city-based sanitation system. There were rooms specially dedicated to bathing, while waste water was directed to drainage outside of the property.

The civilisation was also home to what has been named “The Great Bath”—dubbed the “earliest public water tank of the ancient world”. Measuring 11.88m x 7.01m in size, it has a depth of 2.43m and featured 2 staircases for entry. A natural tar called bitumen was used to line the brickwork, which ensured the water didn’t seep through the gaps.

The earliest known baths on record appeared somewhere around mid-2000 BCE in Knossos, Crete, Greece. As you would expect, it was found inside a luxury palace which also contained a flushing toilet system (which you can find out more about in our history of the toilet. The bathing area itself was home to washing basins and a 5 foot long bathtub made of painted terracotta.

Of course, the Greeks have a long and rich history when it comes to public baths which were often used for cleaning and relaxing. Greek Olympians evolved the idea into buildings that featured heated flooring and water heating furnaces, eventually becoming places where people would come to socialise. Food and drink were added to the entertainment, along with in-built showers, as they were often constructed close by to popular sporting activities. 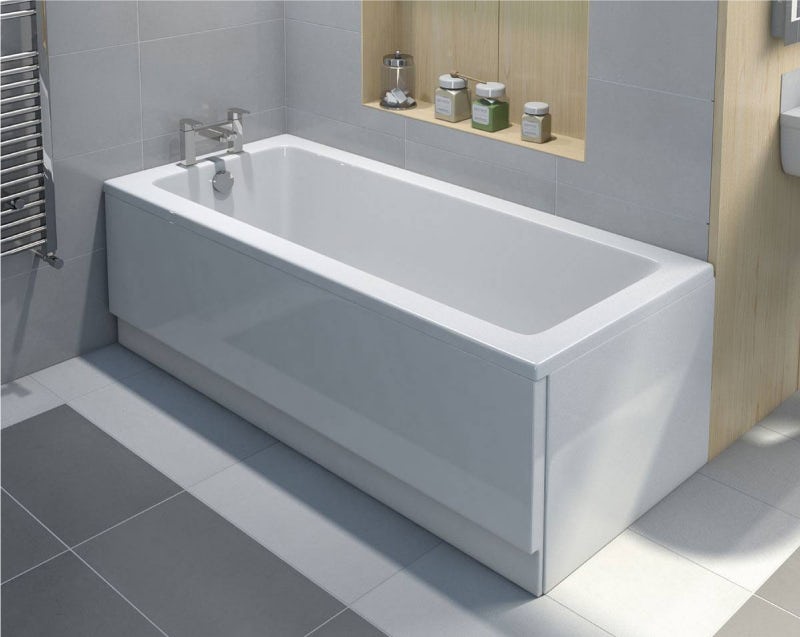 What did the Romans (or Greeks, for that matter) ever do for us? Well, baths for starters...

Another society known for their love of public bathing were the Romans. They invented the Thermae, which were grand in size, while Balineaes were smaller in stature. Similar to the Greeks, the Romans also used these places for socialising, while the rich and wealthy would build their own private bathhouses at home.

As history tells us, the Romans were innovators when it came to water and guttering systems and would rely on these to feed water into the public baths. Water would be heated by log fire, before a Hypocaust system was used to channel the water into the bathing rooms. Hot air and smoke from furnaces would flow through the room and out through the flues in the roof. The main problem that had to be overcome was the high temperature of the floor, which meant that bathers had to wear special shoes to protect their feet.

Take a walk down any medieval street and you’d need a peg on your nose to cover up the stench due to the amount of human waste being disposed of. Yet, while bathing habits may not have been as strong as their Greek and Roman forbearers, people of this period still made an effort to remain scrubbed up.

Back home in the UK there were public houses available to use—it’s just unfortunate that they were also used as brothels. The Catholic Church dominated society at the time and came to the conclusion that all this nakedness (including the bathing) was immoral and had to be stopped. They still managed to retain their popularity in big cities like London and across the water in Paris, until Henry VIII ensured every last one on these shores was closed in 1546.

Anyone with enough money had to rely on a wooden tub for a bath at home, which was filled with warm water using jugs. When it came to cleaning the body, soft sponges were used along with herbs and roses for added scent. As you can imagine, these were almost exclusively found in aristocratic houses, while commoners had no such access to this kind of luxury.

Around the same sort of time, it became popular opinion that how you looked counted far more than your own personal hygiene. This is mostly due to the rise in popularity of clothing made from linen, which was less ragged in appearance and meant people looked more presentable. Medical experts of the time also stated that dirty clothes with odours could cause disease as bathing would let “bad air” seep into the bodily pores. The best way to stay clean, they believed, was to wash the clothes and not the body.

Quite amazingly, this theory stuck for the next couple of hundred years and it wasn’t until the 18th century that the idea of bathing was once again seen as beneficial to your health. Public bath houses started to re-emerge and the germ theory of disease was confirmed by Italian entomologist Agostino Bassi. It meant the outdated belief that odour created disease was finally dispelled, and it changed the importance we humans placed on keeping ourselves clean to ward off harmful microorganisms.

Feet first into the 19th century

The idea of piped running water was slowly starting to become a reality, although its availability wasn’t widespread at this point. Sanitation systems were being constructed in built-up urban city areas, allowing people to take water away from main collection points to use at home for bathing. Saturday night was the time many people would take a bath, becoming quite an event in many households. It took a lot of effort to collect enough for the whole family, which is where the idea of sharing bath water became so popular.

This was also the period where wooden tubs were replaced by copper baths, which were moved around the house as most properties did not have separate bathrooms. The claw foot tub took up prominence in wealthy homes, often made from cast iron with a porcelain lining. They are still a popular choice today in many households, with classic roll top bathtubs adding a touch of luxury to the bathroom.

Towards the end of the 19th century, an American manufacturer going by the name of Standard Sanitary Manufacturing Company started to make cast iron baths with a smoother interior lining. Not only was it more comfortable to use but easier to clean, helping to ward off the threat of germs. Companies like Kohler soon joined the market and started to develop more attractively designed baths during a period when commercial interior design increased in popularity.

Bathroom features of different colours were introduced by the Crane Company in the US in 1928 which further expanded on the designs available to customers. This would include features like baths that could sit up against the wall (one of the most common types still seen today), with more traditional styles, like claw-foot baths, slowly going out of fashion. 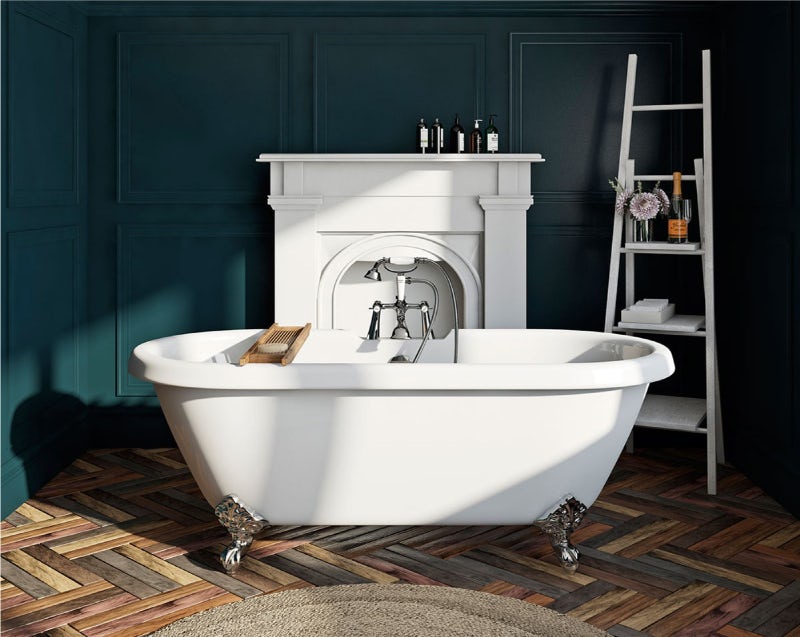 Quite strangely, in 1917 an American journalist called H. L. Mencken published a fictitious history of the bathtub in the New York Evening Mail in an article called "A Neglected Anniversary". It stated that the bathtub had arrived in America in 1842—around 4 decades earlier than it actually happened—made from mahogany with a lead lining. Mencken said that it wasn’t until President Millard Fillmore installed one in the White House that it became a socially acceptable norm.

Even though he readily admitted the article was false in its entirety, it was still referenced for many years by historians and was even referred to in a 2008 Kia car TV advert, which made no mention of the "facts" not being true at all.

The 20th century and beyond

The installation of bathrooms into new houses in Britain only began in the 20th century in the aftermath of the Second World War when the government undertook a huge rebuilding exercise. However, there were still quite a few houses in the 1960s that didn’t have separate bathrooms, with people still left to bathe in the living room or kitchen and having to visit an outdoor toilet to relieve themselves. It was very much the same situation in America, despite the country undergoing a construction boom after end of the First World War.

In the modern age we have a broader selection of baths to choose from than ever before. From traditional styles to baths that come with Jacuzzi features—and as we head into the future—baths with smart technology that will automatically fill up at the right temperature.

As advanced as we may get, the simple pleasures of a traditional bath remain just as popular as ever, and the relaxation and comfort that can be enjoyed with a simple soak is still one of life’s little luxuries. Where the evolution of baths go from here is anyone’s guess but as long as we keep on washing, then at least the future smells rosy. 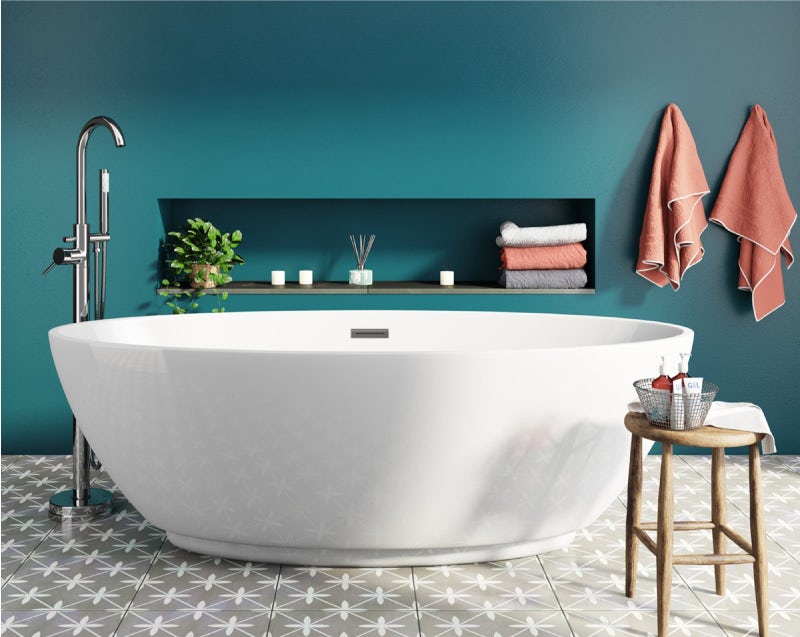 Contemporary baths, like the Harrison freestanding bath pictured above, are simple and stylish yet highly durable

Discover more about the history of the bathroom

At VictoriaPlum.com, we’re mad about bathrooms. In fact, you’ll find loads of interesting articles about the history of the bathroom right here. Simply click on one of the links below to find out more.

Find out more about baths

For more information on modern baths along with tips on installation and cost, check out these handy articles.

At VictoriaPlum.com, not only do we know the history of baths, we also stock a comprehensive range from traditional roll top tubs to contemporary, designer models. Discover your perfect bath today by clicking on the image below.