The history of showers

According to many sources, the shower is where we do some of our deepest thinking—but do you ever spare a thought for the shower itself?

For some reason there’s a perception that the shower is a relatively new invention that hasn’t been around as long as baths or taps. Maybe that’s because of the modern technology we benefit from today that gives us power showers and heated water options at the touch of a button, and we wonder why anything less would’ve sufficed in the past.

It’s estimated that around 85% of British homes feature a shower in one form or another and they are more accessible to people now than at any other time in history. The history of the shower actually dates back thousands of years, so, let us take you on a journey from the very beginning up to the present day.

Before us clever humans put together the concept of making a shower, we turned to waterfalls to provide the most effective and relaxing way to clean ourselves. Of course, these are still available today, but unless you’re travelling to a remote corner of the world, the chances of being able to shower under a waterfall are now pretty low.

Washing under a waterfall worked extremely well, due to the constant flow of fresh water passing through and it proved to be more efficient compared to using standing water or even washing in rivers. Rather than bringing the water to us via basins and bowls, we used to go to the source itself, giving us a quick and easy way to remain clean and fresh.

Ancient Egyptian societies were filled with ingenious ideas and they too saw the luxurious benefits that come with showering. The rich and wealthy would ask servants to collect jugs of water that could be slowly be poured over them while bathing in private shower rooms. Compared to filling a bath, it required fewer jugs to be filled, reducing the work required of the servants.

This was only something that those at the upper end of society would ask to be carried out, as the task of filling jugs and asking someone to pour it over you was the sort of activity exclusively enjoyed by those with enough resources and power.

As history tells us, the Greeks enjoyed showing off their athletic prowess, which was one of the reasons why so many ancient Greek bath houses were built close by to sporting stadiums. These also included the installation of showers which would be used en-masse by the public throughout the day.

Much like in Roman society, these bathhouses became a place to socialise, at the same time encouraging many to keep showering on a regular basis. There is also evidence of water systems that carried it into the homes of people via aqueducts before being drained out into sewers. 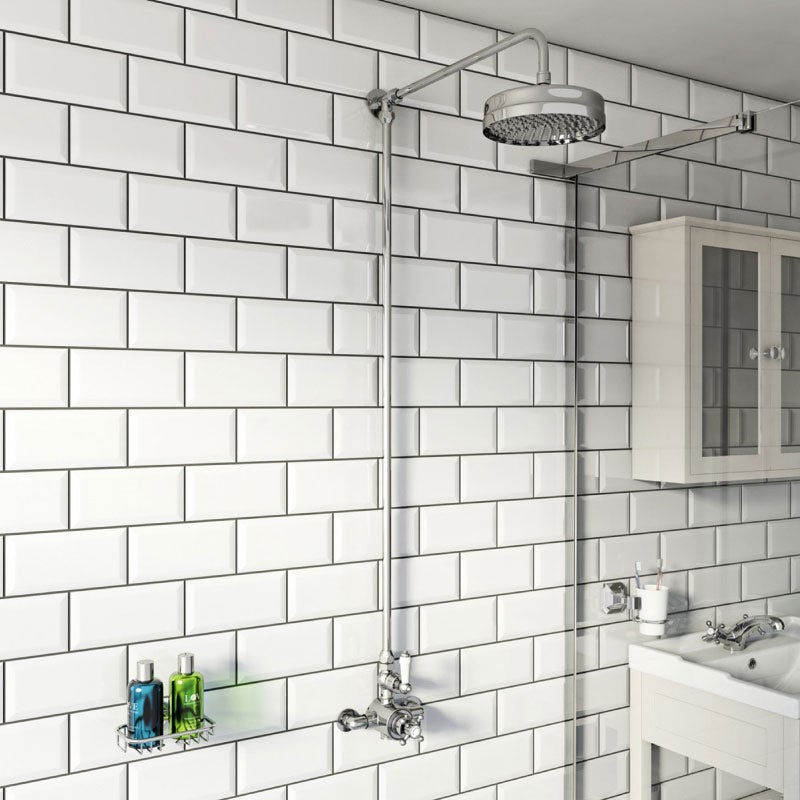 Shower design has moved on a long way since Roman times

Whenever talking about taps, baths or showers, the Romans always feature prominently thanks to their engineering expertise. Roman bathhouses featured facilities for bathing and showering and the use of log-fire heated water also meant the people could enjoy a warmer temperature. These are probably some of the earliest warm showers made available to people on a wide scale.

The rise of the Roman Empire meant these facilities were made widely available across their domain, until their grip on power crumbled and the technology eventually ran into disuse. The Dark Ages were upon us—which meant many of the advances made with previous showers were quickly lost.

It wasn’t until 1767 that the idea of the shower as we know it today made its first appearance. In fact, it took a stove maker from London called William Feetham to patent the first mechanical showering device.

The shower was operated using a hand pump, which in-turn filled a container above the shower head, which the user released by pulling on a chain. It was certainly a more convenient way of taking a shower rather than having jugs filled and poured onto the individual, but that’s not to say it didn’t have its problems.

Firstly, hot water could not be added to the device, so at best the user could enjoy water at room temperature. The same water would have to be reused repeatedly, which was obviously not the most hygienic way of keeping clean. These were the main reasons why Feetham’s design never really caught on and, although subsequent designs tried to improve on the idea, none could overcome the same 2 main problems.

Moving into the Regency era in the early 19th century finally brought with it an updated version much closer to the type of showers we still use now. It was approximately 3 metres in height, featuring a water basin suspended by 5 metal pipes. For these elements to blend in with the interior décor, they were often painted with a more “natural” colour.

A nozzle was connected to the bottom of the basin that then enabled water to fall onto the user below. Not only was the design more graceful than Feetham’s rather crude architecture, but it also allowed the use of warm water via the basin. It was embraced by the rich and wealthy, with the design being modified over the following decades to include hand pumps for refilling the basin and adjustable nozzles—which we still use today.

The introduction of running water in the home during the mid-1800s enabled the use of showers to become far more widespread. Instead of going to the nearest well or river to fish out buckets of water for use at home, more and more people across the UK had access to clean, fresh water directly in their homes.

A French inventor called Francois Delabost encouraged the installation of showers in prisons and army barracks. He believed communal showers were a more hygienic and efficient way for prisoners and soldiers to remain clean, rather than reusing the same dirty water in bathtubs.

His invention involved a steam engine that heated the water in less than five minutes, which was then pumped directly to 8 shower stalls. It meant that, by using only 20 litres of water, 8 different people could be cleaned at the same time. It proved to be a big success and by the early 1900s it had found use in public bathhouses, boarding schools, prisons and army barracks across Europe. 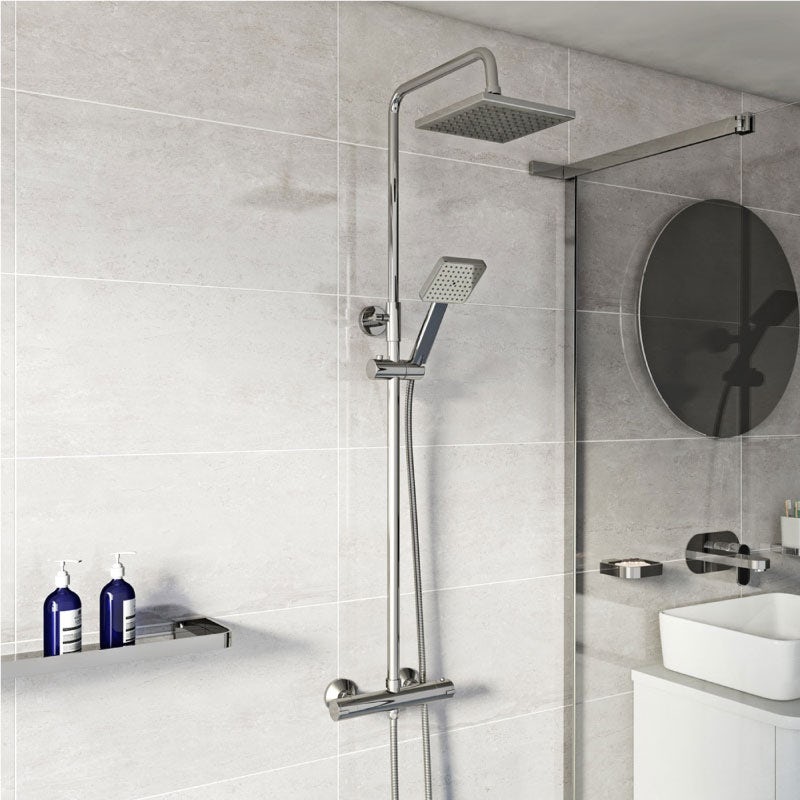 During the Victorian period, some private residencies and athletics clubs featured needle showers that contained numerous jets that would aim the water at people from multiple angles. The idea behind this original invention was not only to keep people clean, but rather bizarrely, to massage the internal organs.

High pressure body jets still exist today and while they offer a great number of benefits, massaging the inside of our bodies is not one of them. It proves once again that not only has the technology come quite a long way, but thankfully, so has our understanding of the human body.

Moving into the 20th and 21st century, with more people able to turn on a tap to receive water at home, they were also starting to benefit from hot water boilers and electric showers. Old concerns about cold showers were banished and the power now available in the shower was stronger than ever before.

Anyone old enough to have visited the old-style swimming pool changing rooms will probably remember the rain shower/spray bath. It contained a fixed head that aimed the water stream at the floor or was slightly slanted towards the individual, closely resembling the style used in homes today.

This style quickly evolved with the arrival of the electric shower in the 1960s, making it a more affordable and accessible utility for people right across the UK. All you needed was a cold water supply (which was the norm for every home by then) and ability to heat water to the right temperature. It helped to revolutionise the way people cleaned themselves at home and with domestic lifestyles becoming faster and busier, making life more manageable for working families.

Once we arrived in the 1980s a broader range of shower accessories became available on the market, offering different styles of shower heads, designer soap trays, body jets and lighting to create the right ambience. It has remained the same ever since and with the growth of online shopping over the past decade, people can now pick and choose whatever type of shower system they need in a matter of minutes, before having it delivered to their front door, sometimes the very next day!

Looking into the future

From standing underneath a waterfall, to turning on a power shower, we have come a long way in a short space of time. Where the shower was once just a luxury affordable by only a few, there is very little reason why it can’t be installed in any home today.

So, where do we go from here? Technology is evolving all the time and connectivity between smartphones and our utilities at home and smart showers seem to be the way we’re heading. Touch screen shower glass may also be the next step forward, making it even easier to control our time spent washing away the day at the touch of a button.

One thing is for sure, no matter what sort of technology or style of shower we use over the next 100 years, the simple pleasure of standing underneath a hot stream of water will always keep us coming back for more.

We’re passionate about bathrooms, which is why you can discover a whole host of articles about the history of the bathroom. Simply click on a link below to find out more.

You’ll discover plenty of information and advice on showers at VictoriaPlum.com, including buying guides and installation instructions. Click on any of the links below.

Looking to purchase a brand new shower? At VictoriaPlum.com, you’ll find one of the widest selections in the UK, including big brand names like Ideal Standard, Mira Showers, Grohe, Bristan, Aqualisa, Triton and more. Click on the image below to begin browsing.